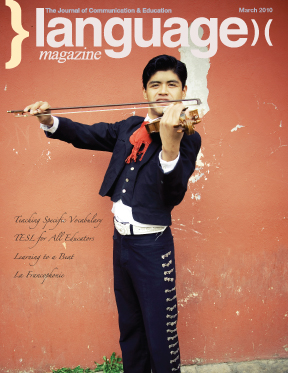 President Obama’s appointment of Thelma Meléndez de Santa Ana as assistant secretary for elementary and secondary education at the Department of Education represents an enormous opportunity for English language educators. For the first time, an English learner with first-hand experience of succeeding in a second language is in a position to make a real difference to federal policy.
At last month’s National Association for Bilingual Education convention in Denver, Ms. Meléndez spoke of her struggle for educational excellence and how just one kindergarten teacher, Mrs. Silverman made a special effort to help her believe in herself, inspired her to become an educator, and changed her life.
Once in first grade, she was put in the lowest reading group despite the protests of her immigrant parents that she could already read proficiently in her native Spanish. In high school, counselors consistently told her that community college should be her aspiration and that she had no chance of going to her dream school, UCLA.
Since her appointment, Meléndez has been commended for her ability to listen and take on board various views which is a valuable attribute especially now that the Administration has made it clear that they intend to reauthorize the No Child Left Behind Act and are looking for input.
At a recent meeting to hear governors’ views on education funding, Obama emphasized ways to align federal and state efforts to boost student achievement. The President said his administration would propose requiring states to adopt new math and reading academic standards as a condition for qualifying for the more than $14 billion in federal Title I funding available each year. States that put these standards in place would then be able to compete under a separate new fund to adopt the highest quality, “cutting-edge” standard assessments, the president said.
According to the Administration’s budget, Title III spending on English learners will increase by $50 million to $900 million in 2011 and the Administration’s reauthorization proposal will support strengthened professional development for educators, improved accountability, and the development and implementation of innovative and effective programs. The proposal also would strengthen the conditions governing states’ receipt of formula funds and would shift more funds to competitive grants in order to support the development and implementation of high-quality programs for English learners, including dual-language and transitional bilingual programs.
These measures are steps in the right direction but there is so much more that could be done to make No Child Left Behind adhere to its main objective of closing the achievement gap.
Teachers of English as a second (or other) language, bilingual educators, and their various associations need to work together to construct a cohesive message and make the most of the opportunity offered by Meléndez’ appointment. Now that the White House has a sympathetic ear, let’s give it a unified and clear message before it succumbs to the deafening chatter of competing demands.

When English Doesn’t Add Up Natalie Grover, a math teacher, argues that all educators need to be adequately trained to teach English learners