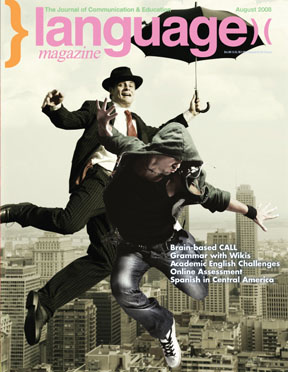 As fuel prices inflate the cost of travel and concern for the environment increases, the ideal that everyone should have the opportunity to study abroad becomes less attainable. At the same time, such trips and other intercultural experiences are being recognized as an essential part of education in our global economy, so we have to make the most of all opportunities for cultural exchange.

In all probability, study abroad figures will continue to rise despite economic concerns. Also, those students who are unable to physically travel need not forego the benefits of multicultural experience as long as we take advantage of the opportunities available. Technology is opening up the possibility for all students to interact with other students and teachers from all over the world, but schools need the funding to ensure that they have high-speed internet access and that their teachers have the training to make the most of it.

Fortunately, both presumptive presidential nominees Barack Obama (D) and John McCain (R) have made technology a focal point of their education platforms. McCain favors federal funding for virtual schools and online courses as part of a larger focus on school-choice initiatives, while Obama wants universal broadband access and more federal investment into research and education.

According to his campaign website, McCain plans to target $500 million in existing federal funds to build new virtual schools and support the development of online course offerings for students. The plan allots $250 million for states to build virtual math and science academies and another $250 million for digital-passport scholarships, whereby low-income students will be eligible to receive up to $4,000 to enroll in an online course offered by a virtual provider.

Obama’s education advisor has recently stated that the Senator intends to push for broadband internet access in all K-12 classrooms, and, according to his website, he plans to double federal investment in early education and educational research and development by the end of his first term in office.

As long as these campaign commitments are upheld, teachers will have the ability to introduce their students to virtual classrooms and online communities from all over the world. Already many American schools have set up internet-based collaborations with schools in other countries using text, audio and visual links to enable children to practice language skills while making friends. As connectivity improves, there will be opportunities for virtual immersion in world languages and the sharing of cultural experiences on a level which we could not have imagined a generation ago.

Of course, our own multicultural communities also offer opportunities without the need for travel or the internet, and those who are studying abroad will probably consider extending their trips to defray increased travel costs, but we need to make the most of all the opportunities the communication offers us to overcome international boundaries and create truly global classrooms.

..or trilingual” has been met with a barrage of criticism from conservative commentators claiming that he is criticizing Americans who speak only English instead of speakers of other languages who should be learning English.

For example, a Denver-based talk show host on a major station, was appalled by the concept of Americans learning Spanish to help Latino children, and criticized Obama for not supporting a law that would make English the official language of the U.S. Other comments included “English is the language of commerce and should stay that way,” and “As long as I live in America, speaking English is sufficient.”

The point that the presumptive Democrat Presidential Candidate was trying to make was that U.S. students must learn a second or even third language or the country will struggle to compete in the global economy.
“We as a society do a really bad job teaching foreign languages, and it is costing us when it comes to being competitive in a global marketplace,” the Illinois senator said, adding that India has a “huge advantage” because most people speak English besides their native language.

“When it comes to second-language learners, the most important thing is not to get bogged down in ideology, but figure out what works. Understand that my starting principle is, everybody should be bilingual or everybody should be trilingual,” he continued.

Obama has also said that immigrant students must eventually learn English so they can fully assimilate into American society, that he supports transitional bilingual education, and that he is open to teaching in other languages if it is the best way to learn.

He is not saying immigrants do not have to bother learning English because English speakers are going to learn their languages instead, but that “everybody” should learn two or three languages including non-English speakers. Any presidential candidate who disagrees with this position cannot have the long-term interests of his people at heart, because it is plainly obvious that the ability to speak more than one language is becoming more and more valuable as the world shrinks.

English is a very successful language that has grown and adapted to become the world’s only true lingua franca – it does not need the paranoid protection of xenophobes who fear that they will be marginalized by the growth of alternative languages. All of us who have had the humbling experience of being in a situation where we do not understand the language being spoken can appreciate this fear. However, rather than accepting it, as with all fears, we should work to overcome it, and the best way to do that is to learn a new language. Who knows? Some might even enjoy it.