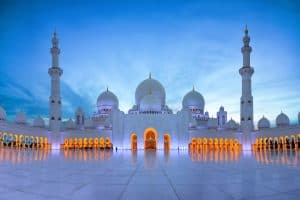 Although the Emirates are not as traditionally popular a destination to study Arabic as Syria or Jordan, they present a potentially less overwhelming alternative along with a selection of quality language centers. Dubai and Abu Dhabi, the two largest cities in the Emirates are both highly multicultural with a large contingent of foreigners, including Western foreigners, to help smooth the transition to living in the UAE. In fact, the country’s demographics on the whole stand out in the unusually high numbers of non-native residents. Emiratis themselves constitue only one fifth of the entire population, while Indians, Iranians, other Arabs, and Europeans and East Asians make up the other eighty percent.

Despite the cosmopolitan nature of UAE’s cities and the workability of English as a medium of communication, Arabic language and culture retains importance as a liaison between non-Arab visitors and local society. Even among foreign residents, many either Muslim and know Arabic, or are expatriates of other Arab countries. According to an article by Gulf News, UAE’s largest English-language newspaper, Arabic is an important means of establishing trust and rapport in both business and social settings.

While Dubai and Abu Dhabi are the two largest cities and host the largest number of institutions for learning the Arabic language, opportunities are also available in smaller cities like Sharjah, the 1998 Cultural Capital of the Arabic World, and Ajman. Language schools and classes can be found for both Modern Standard Arabic and Gulf Arabic, the dialect spoken in UAE. In addition, the website Gulf Arabic is a popular and well-regarded online place to begin studying the Arabic spoken in the Emirates.

Further reading: Saffarini, Reema. “Learning Arabic in the UAE.” Published in Campus Notes, a division of Gulf News on October 21, 2007.