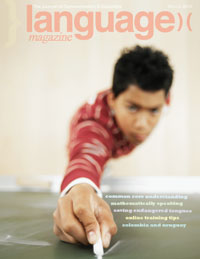 Strange Bedfellows
Julie Gordon chronicles the efforts of linguists, indigenous communities, and Google to create a comprehensive online information source on endangered languages
Speaking in Our Defense
David Edwards reflects on the first year’s work of the Defense Language and National Security Education Office
Cutting to the Common Core — Understanding Language
Kenji Hakuta and Martha Castellón present the challenges and opportunities for English Language Learners
Secrets of My Online Success
Language Magazine asks the experts how to get the most out of online professional development programs
Immigration Reform and English
Paul Musselman sees the proposal for an ESL requirement as an opportunity to innovate
Mathematically Speaking
Gisela Ernst-Slavit and David Slavit explore the linguistic challenges created by calculations
Study in Uruguay
2016 marks the 500th anniversary of the arrival of Spanish in Uruguay, so what better time to visit the Republic East of the Uruguay River?
Colombia Destinacíon Fantastico
Reviews Way with Words
Last Writes Richard Lederer is Full of the Joys of Spring