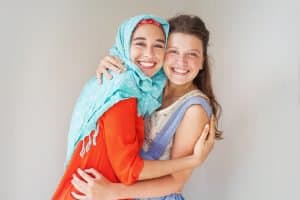 In a highly globalized world, in which country borders are increasingly permeable and the migration and movement of peoples is becoming the norm, language and cultural competencies are ever more essential.

However, less than 10% of Americans speak a language other than English, but 75% of the world’s population does not know English. This easily puts Americans at a disadvantage on the global scale. U.S. secretary of education Arne Duncan stated, “To prosper economically and to improve relations with other countries, Americans need to read, speak, and understand other languages.”

There’s no shortage of studies that point to the benefits of students at the K—12 level learning a new language. The National Research Council (2007) found that children who study a foreign language show great cognitive development in areas such as mental flexibility, creativity, and higher-order thinking skills.

Studies have revealed that children who study a foreign language: perform better and produce higher scores on standardized tests; show greater cognitive development in such areas as mental flexibility, creativity, divergent thinking, and higher-order thinking skills; develop a sense of cultural pluralism that allows them to value, understand, and respect different cultures in the U.S. and abroad; improve their self-concepts and overall sense of achievement in school and beyond.

In an increasingly global economy, fluency in a second language not only benefits the individual but it also enhances their cultural competence. The study of language and culture can foster understanding across borders and cultures and bring youth from across the world together in a way that no other activity can.

By 2043, the U.S. is projected to become a majority-minority nation for the first time in its history. And in some states, this has already happened. This increasingly globalized environment means that our youth must have the social and professional skills needed to contribute in a meaningful way to a global society. Language is the key to collaboration, and giving youth the opportunity to master a second language is essential.

Fluency in a second language can also be an incredibly important asset to an individual’s future employers and the U.S. economy. 95% of the world’s customers live outside of the United States and one in five jobs in the U.S. is dependent on trade. Furthermore, the fastest-growing economies in the world are not English dominant. Knowing a second language, then, provides youth an advantage when entering the labor market and also stimulates our own nation’s productivity and increases our potential and standing on a global scale.

Arabic is one language in particular that can provide a number of rich opportunities. Arabic is considered a critical language by the U.S. State Department because of U.S. strategic business and security interests in the Arab world and it is currently the fifth-most-spoken language in the world. Yet fewer than one percent of public and public charter schools offer Arabic. Of the 33 million elementary school students in America today, only 24% receive global language instruction, and fewer than one percent study Arabic.

Most students do not begin studying a second language until the age of 14, putting the country behind 21 of the top 25 industrialized countries. Despite being a world leader, the U.S. suffers from “a pervasive lack of knowledge about foreign cultures and foreign languages [that] threatens [its] ability to compete in the global marketplace and produce an informed citizenry.” One in five American jobs is tied to a foreign trade; however, children in public schools are not prepared to take advantage of the benefits of the global economy, because they are not literate in a second language. At the higher-education level, Arabic has made great gains. However, to maintain these gains, and in order to make Arabic a mainstream language, Arabic instruction needs to be anchored in the K–12 context.

In 2011, the U.S. Department of Education (DoE) slashed 47% of its funding of critical languages, which include Arabic and Mandarin Chinese. In 2012, the DoE eliminated all funding for Foreign Language Assistance Program (FLAP) grants, the only source of federal education funding for K–12 foreign language innovation and best practices. Despite proven evidence that the early learning of a second language has significant developmental benefits, and general agreement that international communication is more important than ever for U.S. strategic competitiveness, an entire generation of American youth is at risk of falling behind its global peers.

Responding to this pressing need to provide opportunities for students to enroll in Arabic and to prepare students to become global citizens, as well as necessity for deeper, more positive engagement between people living inside and outside the Arab world, Qatar Foundation International (QFI) launched the Arabic Language and Culture (ALC) program in 2009. ALC’s goal is to “build bridges across cultures by increasing the number of young people in the Americas with good knowledge and understanding of Arab culture.” To do this, QFI works to increase the number and quality of Arabic programs in the Americas; supports teachers of Arabic and increases the supply of highly qualified certified teachers; and facilitates the creation of age-appropriate and effective materials and resources.

QFI’s work is context specific and driven by the needs of the community. Each school program and grant is unique, and as such, QFI does not have a blanket approach to programming. In the U.S., it was determined that no curriculum would be created, due to the standards-driven instructional model and to increase the autonomy of each school and program. Rather, QFI encourages the use of backwards planning and child-centered pedagogy in addition to using cutting-edge foreign-language teaching methodology. In Latin America, however, a lack of curriculum has been identified as an obstacle for the growth of Arabic in the region. As such, QFI is beginning to work on the creation of a curriculum in conjunction with educators both at the secondary levels and with the higher-education sector there. In all contexts, a major dearth in qualified teachers emerged as an obstacle to sustainable quality Arabic programs, and this has subsequently become a major area of focus for QFI programming.

With the world becoming more interconnected, giving youth the tools to make a meaningful contribution is critical, and language learning at the K–12 level plays an important role. Whether students learn Arabic or another language, it’s clear that the benefits do not reside solely in mastering a particular grammatical structure or vocabulary. Students also gain the ability to hold meaningful relationships with a wider array of people and to make a positive impact in different parts of the world. As one of QFI’s students eloquently stated, “Because I can speak, read, and write in Arabic, I have a second way of learning. To me, Arabic isn’t just a language, but a different outlook on life, one that always encourages hospitality and respect.”

Carine Allaf is director of programs at Qatar Foundation International. She focuses on the improvement of the teaching of Arabic as a foreign language (TAFL) field across the Americas. As a full time lecturer in Teachers College, Columbia University’s International Education Development program from 2010 to 2013, Her programs centered on women in the Arab world, education in conflict and emergency settings, strategic planning in international settings, and international development. These courses were an outgrowth of her research agenda that looks at women’s positioning in development specifically in the Arab world and on education in conflict and post conflict situations.

Allaf has also worked at the American Community School in Beirut, Lebanon; for the Center for International Development and Education (CIDE) at UCLA; Save the Children in Iraq; and UNICEF in Jordan, Sudan, and Palestine. She has also served as a consultant for the Inter-Agency Network for Education in Emergencies (INEE) on a variety of projects. Carine obtained her Ph.D. in Comparative and International Education from UCLA, and also has a Master’s degree in Elementary Education from the Department of Curriculum and Teaching at Teachers College, Columbia University.