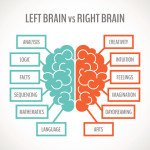 Language learning and processing is usually dominated by the left side of the brain, which is adept at tasks that involve logic and analytical thinking. However, in a recent study that mapped brain information flow while processing intelligible speech in English and Mandarin Chinese, it was found that in Chinese speech comprehension there are neural dynamics between the left and right hemispheres of the brain.

Speakers of both English and Mandarin Chinese both showed brain activity in the brain’s left hemisphere. However, Mandarin speakers also showed brain activity in the right hemisphere of the brain, a region important for processing music through registering different pitches and tones. English speakers do use tones to communicate emotional information, but not to convey anything about the meaning of a word. In a tonal language like Mandarin, the same basic sounds can refer to vastly different meanings depending on its accompanying tone.

Although the implications of whether or not the world looks different in different languages are still unclear, the study supports one emerging theory – connectionism – which proposes that knowledge is distributed across different areas of the brain. Gang Peng, deputy director of the Joint Research Centre for Language and Human Complexity at the Chinese University of Hong Kong and a co-author of the recent study told Quartz, “Pitch processing is crucial for music, but also crucial for tone processing of a tone language. Based on our current results, it is reasonable to hypothesize that all tone languages use both hemispheres.”