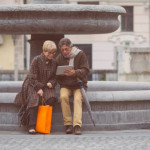 A recent study at Belgium’s Ghent University has established that the symptoms of Alzheimer disease (AD) manifest themselves about four to five years later in bilinguals as opposed to monolinguals, confirming previous findings. In bilinguals, the disease onset was estimated at the age of 77, while in monolinguals, this was at the age of 73.Between March 2013 and May 2014, 69 monolingual and 65 bilingual Belgian patients suffering from probable Alzheimer’s disease (AD) participated in the study. Psychologists Evy Woumans, Michaël Stevens, and Wouter Duyck, together with neurologists Patrick Santens, Anne Sieben, and Jan Versijpt determined the age of AD manifestation and AD diagnosis for both language groups.

Results showed that the age of AD manifestation was 71.5 in monolinguals and 76.1 in bilinguals. A similar difference was found for the age of AD diagnosis; for monolinguals this was 72.5 and for bilinguals it was 77.3. Analyses controlled for other confounding factors, such as education, profession, and socioeconomic status, which actually had a negative effect.

These findings confirm previous research suggesting that bilingualism can slow down cognitive ageing and contribute to cognitive reserve. It seems that constantly and actively controlling two languages is like a workout for the brain. It challenges our grey cells and keeps them from degenerating.