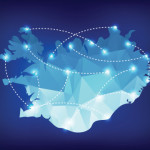 In 2013, a paper by András Kornai entitled “Digital Language Death” estimated that only 5% of the world’s languages would ascend into the digital realm, and that the rest would die off in a massive language extinction. While this has greatly been true for many indigenous languages, the globalizing effects of the Internet and other English-language technologies have threatened the cultures of entire countries. Many countries have recently announced either resistance to or acceptance of the inclusion of English-language loan words, or Anglocisms, but in the case of Iceland, the Icelandic language may be entirely replaced by English.

The Icelandic language is not only linked to the culture of Iceland, but to the country’s national identity. Ari Páll Kristinsson, linguist at the Icelandic government’s language research agency, said “Land, nation and tongue was a divine trinity — not the divine trinity. But on a similar level as that.” He continued, “If we lost the Icelandic language, there would be no Icelandic nation, and if there’s no Icelandic nation, there is no Icelandic sovereignty.” Iceland won its independence from Denmark during World War II, but along with the establishment of an independent Icelandic identity came English-language influence with 40,000 U.S. troops stationed on the island. This exposure to English was only exacerbated by the English-dominated Internet, leaving the Icelanders, along with many other linguistic groups witnessing the marginalization of their mother tongue, wondering how to remain competitive in a modern world.

Eiríkur Rögnvaldsson, a professor of Icelandic grammar, offers a solution: “We don’t have any control over this; it is Google that owns this technology and we can’t use it for just any devices we have here. Google can decide at any point to stop offering this service or start charging us for it […] We need to create our own software, that we have ownership of and can use however we like.”