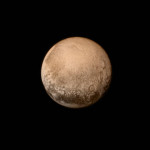 The name Pluto comes from the greek Ploutōn (Πλούτων), who was the ruler of the underworld in Greek and Roman religion and mythology. Plouton, sometimes conflated with Ploutos, the god of wealth who also dealt with the underworld in that mineral wealth was found under the ground, was a more positive ruler of the dead than his Greek counterpart, Hades. Pluto, the ex-planet, was named by 11-year old Venetia Burney in 1930. Burney proposed the name to her grandfather after they read a newspaper story about the discovery of a new planet. Burney’s grandfather, the retired head librarian at Oxford University’s Bodleian Library, passed the idea along to his astronomer friend who loved the name and telegraphed his colleagues who discovered the planet at the Arizona observatory. The scientists voted unanimously in favor of the name, and Pluto officially became the ninth planet in our solar system. Ventia Burney holds that she was interested in Greek and Roman myths at that age and did not name Pluto after the canine Disney character that debuted the same year. “It has now been satisfactorily proven that the dog was named after the planet, rather than the other way round. So, one is vindicated,” said Burney in a 2006 interview with the BBC.

Pluto’s first and largest moon was discovered by Jim Christy in 1978 and given the name Charon. The moon was named both after Christy’s wife, Charlene, and the ferryman who brought damned souls across the River Styx into Pluto’s realm of the underworld. The discovery of Charon allowed scientists to calculate that Pluto was smaller than Mercury and even smaller than Earth’s moon. In 2005, the Hubble telescope discovered two more moons of Pluto, Nix, named after the mother of Charon, and Hydra, named after the Greek serpent monster guarding the entrance to Hades. Eris, a dwarf planet larger and further from the sun than Pluto, was discovered and named after the Greek goddess of discord that same year. Upon the discovery of another larger planet than Pluto, The International Astronomical Union (IAU) formed a committee to more clearly determine the definition of a planet. In 2006, it was decided that Pluto was a dwarf planet because, although it matched all other criteria, it was not gravitationally dominant in its orbit. Pluto’s fourth moon Kerberos, alluding to the multi-headed dog guarding Hades, was discovered in 2011, and one year later, images from the Hubble telescope revealed a smaller fifth moon, christened Styx, after the river separating Earth from Pluto’s realm of death. Now, as New Horizons uncovers a clearer map of Pluto’s topography, the dwarf planet’s icy landscapes are being informally named after characters and fictional areas of the underworld, including a dark patch currently called Mordor.