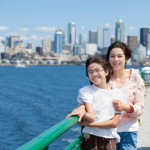 “Knowing the time that it takes students to develop English proficiency provides educators with a measure of how quickly they can expect students to progress and helps schools identify specific programs and practices that are successful in developing students’ language and literacy skills,” said REL Northwest’s Jason Greenberg Motamedi, author of the study.

The study found that ELLs entering school in grades three and four took more than a year longer to be reclassified as English proficient than those entering kindergarten. This suggests that additional attention and interventions should be given to students who are arriving later in elementary school. Additionally, nearly a fifth of the students had not reached English proficiency by the end of the eight years studied.

“Successfully moving students out of English learner status is critical to their academic success,” said Greenberg Motamedi. “Research shows that students who have not reached proficiency in English struggle to learn grade-level content, take longer to graduate, and graduate at much lower rates than their English-proficient peers.”

Greenberg Motamedi explained the study has triggered local conversations on how to provide similar levels and types of instructional support to all Road Map ELLs.

Over the past eight years, the number of students in Washington who speak a language other than English in the home increased more than 70%. Of those students, 44% are classified as ELLs.

Contrary to national trends, ELLs in Road Map districts who entered in grades two through five with the highest levels of English proficiency took longer to be reclassified as non-ELLs than those with the lowest proficiency. Also, students in schools with higher percentages of free or reduced-price lunch (FRL) eligibility were reclassified faster than students in schools with lower FRL eligibility rate

Download the full study, Time to reclassification: How long does it take English learner students in Washington Road Map districts to develop English proficiency?, at the Institute of Education Sciences website: http://ies.ed.gov/ncee/edlabs/projects/project.asp?projectID=348.