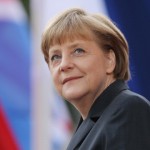 Merkeln is in the lead for the German publishing company Langenscheidt’s annual Youth Word of the Year. Winning by over 20%, the word is a verb meaning, “to do nothing, make no decisions, and issue no statements,” alluding to German Chancellor Angela Merkel’s seemingly intentionally vague statements on domestic issues. According to NPR News, while Merkel does have a reputation of being decisive internationally, she is domestically known for her wait-and-see approach to politics. The hashtags #Merkelschweigt (Merkel is silent) and #Merkelsagwas (Merkel say something) were trending on Twitter in Germany after neo-Nazis and far-right activists protested the opening of a new center for refugees in Heidenau.

Chancellor Merkel waited to respond to the weekend attacks until Monday. Her response, though delayed, was very clear. “The chancellor and the entire government condemn in the strongest possible terms the violent attacks and the aggressive anti-foreigner sentiment created there,” Steffen Seibert, Mrs Merkel’s spokesman told the Telegraph. “It’s repulsive how far-right extremists and neo-Nazis are trying to spread their hollow message of hatred around a refugee shelter, and it’s shameful how citizens, even families with children, are supporting this spectacle by marching along.”