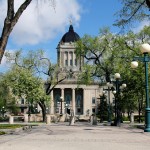 The new Manitoba Aboriginal Languages Strategy is a partnership between the Manitoba government, indigenous groups, post-secondary institutions and school boards will seek to “protect and promote” aboriginal languages. “Language is a critical component of cultural identity, and the Manitoba government recognizes the importance of working with our partners in the indigenous community to protect and promote aboriginal languages,” said Education and Advanced Learning Minister, James Allum.

“We believe by partnering we can move forward on a needed cause. Retention of language is so important for our First Nations,” said Lorne Keeper, executive director of the Manitoba First Nation Education Resource Centre. “Our languages are dying very quickly,” he added. “That’s why the Winnipeg school divisions are so important,” Keeper told CBC News, “All students, and non-native students as well, should be able to have the option of studying a First Nation language.”

Keeper would like to see classrooms in Manitoba offer courses in the main indigenous languages, in particular: the Cree, Dene, Ojibwe, Dakota and Oji-Cree languages, but the implementation of the plan may take a while. “It’s not going to happen over night, it’s a slow process,” he admitted, “That’s where University College of the North will come in because they will be key to this strategy in training.”