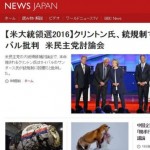 The BBC, the UK’s national news organization, launched a Japanese site, which becomes its first dedicated non-English news website and helps extend its fledgling global advertising network. Accessible via BBC.jp, it features selected content from BBC.com and the organization’s global news service, which is translated into Japanese. Much of the BBC’s operations is funded by the license fee, a mandatory charge that UK citizens pay to own a TV set, but the new Japanese presence is separate from that. The company said that the Japanese website—which is run by a team of editors based in Tokyo—is its “first fully commercial” non-English news site. In other words, it includes ads, and the BBC is hoping to lure potential advertisers with the promise of eyeballs in Japan.

In addition to the website, the BBC also has dedicated YouTube and Twitter accounts for Japan, and it has struck video syndication deals with Hulu, Yahoo Japan, and others. “We hope it will really help build our presence in Japan, where the BBC’s English-language website and World News TV channel are already popular,” wrote Angus Foster, world editor, BBC News website. “Japan has a very important and sophisticated audience for internet news and social media. Our research shows that each month nearly a million users of our English-language site come from Japan, and for 90% of these people, Japanese is their first language.”

BuzzFeed, the online social news and entertainment company, is also launching a Japanese edition. “BuzzFeed’s goal is to merge the best of traditional media, internet culture, and technology to bring great news and entertainment to the people around the world to share,” said newly appointed founding editor Daisuke Furuta in a statement. “In addition to delivering great content to Japanese readers, we aim to provide content from our launching editorial team in Japan to readers around the world.”