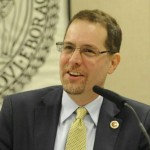 Council members have called on the Department of Education, “to amend the administrative code of the city of New York in relation to foreign language courses offered in New York city public schools.” This new legislation would require tracking of the number of students in dual-language and foreign-language programs including grade levels and detailed reports on instruction. Council member Mark Levine, who is one of the bill’s biggest advocates, published a document on New York’s current language education status, arguing that more needs to be done to create bilingual teachers and provide foreign language education access to lower income areas. “The highest demand for dual language programs has been from middle-income, English-speaking families,” Levine told Capital New York. “The Department of Education is ramping up outreach to low-income families but that is still a big challenge. Dual language classes are one of the best solutions to school integration that we’ve seen.”

Yuridia Pena, a spokeswoman for the Department of Education, said in a statement that the department is currently working to create more dual-language programs; “As a former English Language Learner and a bilingual New Yorker, the Chancellor understands and is a strong advocate of the importance of an education that values and celebrates the learning of world languages,” she said in a statement. “We share the commitment of the New York City Council and other elected officials to expand our students access to world languages in elementary grades.” Council member Levine is fighting to speed up increased access to high-quality dual-language education, working with city schools chancellor Carmen Fariña and promoting language learning through his own channels.