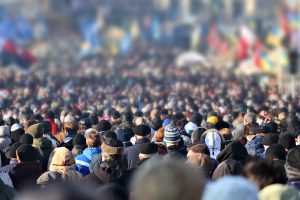 Violence between Cameroon’s French and English speakers has boiled over due to discrimination by French speakers in minority English-speaking regions. Volatile clashes with police has claimed at least four lives.

Cameroonian police have arrested over 100 protesters in the northwest city of Bamenda, where protests erupted over the use of French as the official language and the dismissal of English. Both English and French are the official languages of Cameroon. Lawyers protested, stating the judicial workers have little knowledge of the jurisdiction of British law which operates in the city, while teachers protested to fight the use of French on the English area schools.

According to Deutsche Welle, English-speakers have been protesting against what they see as “second-class citizen status” in the west African nation. While over 80 percent of those in Cameroon understand French, two regions—northwest and southwest—are English-speaking. John Fru Ndi, leader of the Social Democratic Front (SDF) told DW that the government should heed the warning being presented by teachers, lawyers, and the general English-speaking population, and said, “We can summon a big rally here where we will talk to the people. But this should be after solutions to the teething problems that people are asking for have come in from Yaounde.”

While all government documents in Cameroon are to be printed in both French and English, there is concern of some government documents being printed in only French, along with public figures giving speeches in French in English-speaking regions. These protest come only years about February in 2008 when a transport union strike in Douala escalated into violent protests in 31 municipal areas, giving Cameroon its worst violence in 15 years. Many fear that the deaths are only the beginning of this dissatisfaction over language unity in Cameroon.