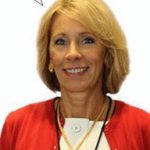 Is Trump’s nomination of DeVos as Education Secretary a bargaining ploy?

Like many of his cabinet nominations, Donald Trump’s proposal that Betsy DeVos lead the Education Department appears to be akin to asking a fox to guard the henhouse, since she is so critical of the U.S. public education system. However, the nomination may be just another negotiating ploy—lowballing—by the self-proclaimed master dealmaker.
American Federation of Teachers president Randi Weingarten has called DeVos “the most anti-public education nominee for secretary of education in the history of the department” and claims she lacks the necessary qualifications and experience to be the nation’s top education official. DeVos “hasn’t taught in a public school,” Weingarten said. “She hasn’t served on a school board. She never attended public school—nor did she send her kids to one. She’s a lobbyist—not an educator.”
In Michigan, DeVos has supported, both financially and politically, a school voucher initiative that voters rejected emphatically and a vast increase in the number of for-profit charter schools with very little oversight, resulting in nearly half of the state’s charter schools being ranked among the bottom of American schools.
Should DeVos’s nomination be approved, most of the current Title I federal funding for schools in low-income areas (much of which benefits English language learners) will be redirected to voucher programs. Congress will allow states to apply for funds to let parents use such vouchers for private or religious schools, and will promote charter schools with no attention to their quality. Some states, like California, may refuse to implement the voucher program, but many others, unable to resist the temptation of federal funds, will be lured into a scheme through which their most vulnerable communities will be denied the opportunity of a public education.
So, the nomination may be an example of Trump following his own advice. In his 30-year-old book, The Art of the Deal, he’s quite candid:, “My style of deal making is quite simple and straightforward. I aim very high, and then I just keep pushing and pushing and pushing to get what I’m after. Sometimes I settle for less than I sought, but in most cases I still end up with what I want.”
In the same book, Trump relates how he once offered $5 million for an airplane which he knew was worth closer to $20 million and how the seller countered at $10 million, which Trump happily accepted.
It may transpire that DeVos is unable to disentangle herself from the 250 companies in which she and her husband have invested and that her nomination is thwarted by the Ethics Office before she even starts the congressional approval process, or her complete disregard for the U.S. public school system may be too much for even a Republican-controlled Senate to endorse, or she may somehow win confirmation.
Whatever the outcome, advocates for equal educational opportunity would do well to skim over the few simple principles in Trump’s book, recognize that everything is negotiable in this new administration, and bargain hard for what they want.