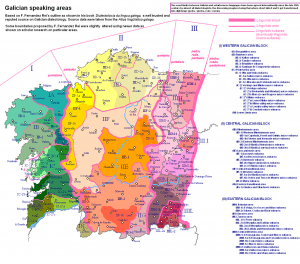 Under the slogan, “Non queremos ser estranxeiras na propia patria. Queremos Galego!” (We don’t want to be strangers in our own country. We want Galician), the Galician umbrella NGO Queremos Galego and A Mesa pola Normalización Lingüística organized a demonstration for Galician in Santiago de la Compostela. Coordinator Suzanne Méndez emphasized that people who love Galician took part in the demonstration because “only through constant social pressure can we ensure our linguistic rights and our future as a people.”

The demonstration is also in response to the government’s unraveling of Galicia’s previously successful language revitalization program and comes at a time when  A Mesa leader Carlos Callon is being criticized for simply for insisting that the correct Galician form A Coruña is used for the city instead of the Spanish La Coruña. Callon has been acquitted once over the issue, and, but now, surprisingly, has been summoned to court again with a new judge.