No Student Is an Island 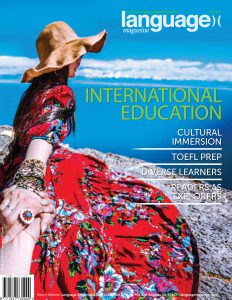 Globalization is here to stay, like it or not, so all of our educational systems should strive to produce graduates who are capable of operating in the international arena. This is a key 21st-century skill.

Ideally, everyone should have the opportunity to study abroad, because the physical experience of adapting to a foreign culture produces learning opportunities that cannot be replicated in a hometown comfort zone. Even short educational trips can have a tremendous impact. When travel is not an option, many of us can take advantage of the diversity within our own communities to give hands-on cultural training, and we can also maximize the communications technology at our fingertips to internationalize classrooms.

With its blockbuster Hunger Games and Divergent franchises leading a range of films, the movie studio Lionsgate has generated an average of $2 billion at the global box office each of the past three years, ranking it among the major studio market-share leaders. Now, it is recognizing the opportunities in producing foreign-language films for markets worldwide (see p.15). Like all cutting-edge companies, Lionsgate needs people who are comfortable working in different languages with different cultures.

Our everyday concerns have changed radically over the course of a generation, thanks to our obsession with communication. Radio, television, telecoms, and cheap travel have transformed our perspective on, and knowledge of, the world beyond our borders.
On the one hand, we have shown remarkable, historical compassion in our reaction and response to the suffering of strangers overseas with whom we are never likely to have any contact, let alone break bread—but on the other, we have revealed our natural fear of change and the challenge that rapid change represents. Given the scale and velocity of globalization in our lifetimes, it’s hardly surprising that there’s a backlash from conservatives who hark back to the “good old days,” when change occurred over decades rather than weeks.

Last month, President Obama said, “I think there was a British poet [John Donne] that said ‘no man is an island.’ Even an island as beautiful as this,” during a trip to the UK, where he advised against leaving the European Union. His comments provoked a strong reaction from many Brits who feared the U.S. president was meddling in their affairs, but Obama explained that Britain’s decision would have many ramifications that would affect the U.S., underlining the interdependence of nations today.

The reality is that we can’t undo or uninvent the technologies that have made our world so much smaller. No tariffs, trade controls, currency restrictions, nor walls will stop the inexorable flow of goods, services, money, jobs, and people across borders.

Twenty years ago, making an international call was a big deal. Twenty years from now, living and working internationally, be it long term, on short contracts, or virtually, will be the norm for most of us, so all schools need to internationalize their curricula by embedding them with world languages and cultures, increasing the opportunity for study abroad, and ensuring that children today receive an education relevant to the demands of the 21st century.

All Readers as Explorers

Touring With Class in Mind

English on the Mark

Top Tips for Students Going to the U.S.