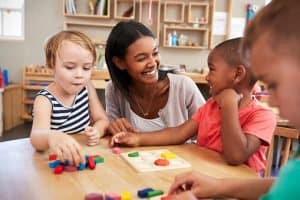 According to a new report from the Migration Policy Institute (MPI), the support offered to young children who speak languages other than English at home varies widely from state to state, and community to community.

“As the population of young Dual Language Learners (DLLs) continues to grow, early childhood policies that recognize and address the learning strengths and needs of these children are crucial to ensuring that all young children have the tools to build a strong foundation for future success,” said Margie McHugh, director of MPI’s National Center on Immigrant Integration Policy. “Unfortunately, the analyses we are releasing today show that far too few states have adopted or implemented such policies.”

The institute uses the term Dual Language Learners (DLLs) for children under age eight with at least one parent who speaks a language other than English at home. Analysis of census figures shows that this population has grown by about 24% since 2000, and now represents about 32% of the nation’s children in that age group.

MPI researchers Maki Park, Anna O’Toole, and Caitlin Katsiaficas found that while these 11.5 million young learners stand to benefit disproportionately from high-quality early childhood education and care (ECEC) services, they are less likely than their peers to be enrolled in such programs, which may contribute to lags in kindergarten readiness and later academic achievement. The factors responsible for this lower enrollment include language barriers and other obstacles that impede access to high-quality ECEC programs, as well as risk factors including higher levels of poverty in DLL households and lower parental educational attainment.

The MPI report includes a series of fact sheets that use U.S. Census Bureau data to outline the key sociodemographic characteristics for these children across the U.S. and in the 30 states with the largest such populations. Among the characteristics covered for this child population: age and enrollment, race/ethnicity, income and poverty levels, parental English proficiency and educational attainment, and top home languages spoken.

The profiles also use information from surveys of state ECEC agencies to denote the presence or absence of policies and practices that are important to the success of DLL children, such as support for bilingual education and services for limited English proficient (LEP) families and early childhood care providers.

The profiles also provide national and state-level information on fourth grade academic outcomes by English proficiency, as a means of helping understand the lags in achievement that DLLs experience later in their academic trajectories that may be due in part to inadequate or ineffective ECEC services. English Learner (EL) students recorded lower fourth grade reading and math scores on the National Assessment of Educational Progress: in reading, 189 versus 226 for non-EL students, and in math 218 versus 243.

Among the MPI findings:

“Our findings should demonstrate to states the significant stake they have in addressing the needs of their growing immigrant and DLL child populations,” said MPI policy analyst Maki Park, who led work on the fact sheet series. “Our mapping of key policies regarding Dual Language Learners should give actors both within and outside early childhood education and care systems a roadmap of measures that can be implemented to close gaps in opportunity and support academic success for all children.”