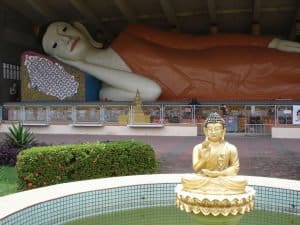 A language previously unknown to linguists has been discovered by Swedish researchers. The language, Jedek, is spoken by only 280 people on the Malay peninsula. The language was discovered to be spoken in a town that was previously studied by anthropologists. The language first became known during a linguistic survey called Tongues of the Semang.

The project aimed to study the Aslian group of languages, a branch of the Austroasiatic language family that is spoken in the Malay Peninsula.

With its low speaker population, Jedek is considered an endangered language variety. According to researchers Joanne Yager and Niclas Burenhult, this is not a new development, however. The number of Jedek speakers was probably never large, and researchers infer that the number of speakers may even be greater now than during the time when speakers resettled into their current geographical location 40 years ago. Children in the community still learn the language as well, so while Jedek is endangered, it appears not to be going extinct anytime soon.

The discovery is still optimistic for protecting the language. Burenhult and Yager say, “Like other unidentified languages, Jedek bears witness to the existence of not only undocumented but also entirely unrecognized linguistic diversity. It also reminds us of the existence of urgent but undiagnosed cases of endangerment. Linguistic surveying was critical to the discovery of Jedek. Although not typically a prioritized aspect of language documentation funding initiatives, surveying is clearly fundamental to the galvanization and regeneration of the documentation enterprise and to maximizing informed future coverage of the poorly charted corners of the world of languages.”

The community in which Jedek is spoken is different than Western societies, and that is reflected in the language. For instance, the community is gender equal, has almost no interpersonal violence, encourages children not to compete, does not have courts or laws, and does not have professions. The reflection of this is that certain words that describe occupations, courts of law, and the acts of borrowing, stealing, buying, or selling all do not exist in the language. One reason the language went undetected for such a long period of time, says Yager, is because there was not a consistent name for the language, possibly due to the nomadic nature of the speakers.

“Jedek is not a language spoken by an unknown tribe in the jungle, as you would perhaps imagine, but in a village previously studied by anthropologists,” said Burenhult. “As linguists, we had a different set of questions and found something that the anthropologists missed.”