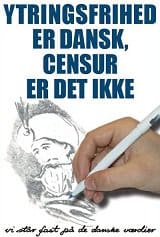 The anti-immigration Danish People’s Party (DF) has effectively called for a ban on schools teaching Arabic with a proposal to Parliament that private schools lose 75% of their income if they fail to comply with a demand to only teach European foreign languages.

“There are schools that specifically counteract integration, namely Muslim private schools. We do not want them to receive state subsidies,” said DF’s education spokesperson, Alex Ahrendtsen.

Ahrendtsen said the proposal would allow for exemptions: “We don’t have any problems with, for example, Chinese or Hebrew,

because Chinese people or Jews do not create parallel societies or integration problems.” Minister for education Merete Riisager of the Liberal Alliance (LA) party declined to comment on the proposal, Avisen reports, but the LA’s spokesperson for education, Henrik Dahl, said that the party would not vote for the proposal. Dahl said the critical issue being discussed was not whether to allow languages to be taught but “schools that teach children not to be integrated.”