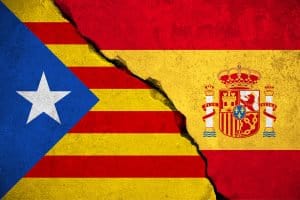 The constitutional crisis in Spain’s autonomous region of Cataluña may soon affect its classrooms. Madrid’s control over Catalan regional affairs is continuing in the wake of the region’s inability to form a government following December’s election, a situation that began after the Catalan parliament declared unilateral independence in late October.
The central government may now make changes to the region’s education policies, which favor the use of Catalan at school over Castilian Spanish. Ciudadanos, the political party that won the most votes in the December election, is now demanding changes to what it views as a pro-independence bias in regional education guidelines.

At a recent press conference, Spain’s education minister, Íñigo Méndez de Vigo, said that the Spanish executive is committed to guaranteeing parents’ right to school their children in Spanish to the extent provided for by law in Cataluña, but did not explain how, adding: “There will be no changes to a linguistic model that was approved by a parliament; the government cannot modify a law that was approved by the regional chamber.”

The main separatist parties, Junts per Catalunya (Together for Cataluña) and the Catalan Republican Left (ERC), expressed confidence that they will soon reach a governing deal to such changes from taking place.

The language of instruction at Catalan schools has been a controversial issue since long before the moves toward independence. In 2012, Spain’s education minister, José Ignacio Wert, made a controversial statement about plans to “Hispanicize Catalan students” and make them “just as proud to be Spanish as to be Catalan.”

Méndez de Vigo may introduce student-enrollment documents allowing parents to choose the language of instruction for their children. “We’re working on it,” said Marcial Marín, secretary of state for education, at a press conference. “We are sensitive to the problem and we will soon announce a decision.”

“We are asking the government to introduce trilingualism in the 2018–2019 school year,” tweeted Ciudadanos party leader Albert Rivera, referring to the use of Catalan, Spanish, and English in schools.

However, there is considerable opposition. “If the government uses Article 155 to blow up linguistic immersion, it will be evident that it wishes to continue hurting Cataluña. It will also evidence our own irresponsibility in failing to form a government,” said Joan Tardà, an ERC leader who sits in Spain’s national Congress in Madrid.

Families wishing to educate their children in Spanish must go through a complicated administrative procedure that involves requesting a subsidy to enroll in a private school. According to Catalan Education Department data, there were 560 requests made in the last three school years, and 50 were approved.