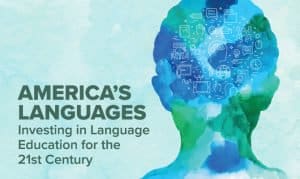 In support of its recent report, America’s Languages: Investing in Language Education for the 21st Century, the American Academy of Arts and Sciences has released a call-to-action signed by 37 individuals and over 150 organizations, including Language Magazine, who urge greater support for languages in order to maintain and enhance American global leadership.

“Bridging America’s Language Gap” has been endorsed by dozens of businesses, academic and professional associations, school systems, and other institutions that support the five recommendations of the America’s Languages report:

“The people and organizations who have signed this call-to-action are witnesses to the enduring importance of language education in the United States,” said Jonathan F. Fanton, President of the American Academy. “They affirm the fundamental recommendation of the Academy’s report: to improve access to language education for as many Americans as possible in order to strengthen our relationships at home and abroad.”

The American Academy will continue to collect endorsements for “Bridging America’s Language Gap” and will update the document periodically.

“The members of the Working Group have come together, across institutional divides, to advance the common cause of improving language education,” Fanton added. “This collaborative spirit is as important as any report or call to action and is the basis of real change. The Academy is proud to have inspired such cooperation through its America’s Languages report, and we are happy to help sustain the Working Group’s ongoing efforts.”

The members of the America’s Languages Working Group include:

Marty Abbott, American Council on the Teaching of Foreign Languages

Emily Spinelli, American Association of Teachers of Spanish and Portuguese

To join the effort, contact John Tessitore at [email protected]