Language teachers have an attitude problem, but not in the usual sense. If anything, we may care about our work too much. We love language, and we dream of passing this love on to our students. But they often have a different view on the matter. Many of them are studying a language not out of interest, but because they have to for their jobs or education. As a result, teachers and students bring widely different outlooks and expectations to the classroom. This is a real problem, because it can keep us from connecting with our students and from motivating them to learn the languages we teach.

Motivation is an essential part of a language teacher’s job, perhaps even more so than for other subjects. Language learning is a marathon: to succeed requires years of sustained effort, but the payoff is great. Somehow, language teachers have to convince our students to make this consistent, long-term effort and give them the tools to sustain it even outside our classrooms. In their research on the motivation of language learning, Zoltán Dörnyei and Stephen Ryan (2015) suggest that the key is understanding motivational narratives—the stories that people tell themselves to make sense of their past experiences and to regulate their own behavior (p. 25). This is essential because “the way people shape their life narrative will shape their whole mindset” (Dörnyei and Ryan, 2015, p. 203).

Like most teachers, I love my subject, and I struggle to relate to students who don’t. But I can relate to the feeling of studying a subject that does not interest me. When I was in school, that subject was gym class. Unlike most of my peers, no one in my family played organized sports, and exercise was considered a necessary evil. If, as Deci (1975) argues, intrinsic motivation is at the intersection of an individual’s innate abilities and their life experiences, then I didn’t have a fighting chance (p. 127–128). My gym teachers, in turn, concentrated their efforts on students who showed more potential. I made it through the required nine years of gym class without ever taking an interest in it.

Every student has experiences like this. Each one enters the classroom with a history of learning experiences, some positive and some negative. Teachers need to create an environment where students can craft positive motivational narratives that position them as able learners. Fortunately, Edward Deci and Richard Ryan’s (1985) self-determination theory of motivation offers some guidance for influencing these narratives. The theory is based on two types of motivation: intrinsic, which involves pure enjoyment, interest, or desire for a challenge, and extrinsic, which stems from external factors such as rewards or social expectations (Dincer and Yesilyurt, 2017). Many teachers see extrinsic motivation as less authentic, and therefore weaker, than intrinsic (Ryan and Deci, 2000). But a closer look shows that fostering extrinsic motivation gives us great power to help our students succeed.

My identity as a nonathlete was well entrenched by high school, so my mother was probably surprised when I came home one day and announced that I was going to run a half-marathon. It hadn’t been my idea: that day, my English teacher had invited our class—all 20-something high schoolers—to run a half-marathon with her. Honored that she saw us as potential partners rather than just students, I was eager to rise to the challenge. It speaks volumes to the power of a good student–teacher relationship that her invitation moved me to actually excavate my running shoes and look up a training plan online.

This motivation persisted. I stuck to my six-month training schedule, but it wasn’t easy. Pounding the pavement mile after mile made my back hurt. Comparing myself to my friends, many of whom swam or ran cross-country, made me want to run fast as well as far. I couldn’t live up to my own expectations. I kept training, but I found it tedious and frustrating—particularly when it never got easier. I’d been doing everything right for months. Why was running still such a struggle? When the race was over, I donated my running shoes with a sigh of relief. This experience solidified my “non-sports-person” narrative, which remained largely unquestioned for the next ten years. Occasionally I would lace up for a half-hearted jog, cutting it short as soon as I started to tire. The impact of my relationship with my teacher had been profound, but it hadn’t been enough to overcome a lifetime of learning that sports were not for me.

A closer look at the motivational forces at play may help explain why I didn’t become a passionate runner, as well as why we may fail to ignite a love of language in our students. My relationship with my teacher couldn’t inspire the sustained effort that it takes to become a runner (or, for that matter, a proficient language user) on its own. But perhaps it would have been different if I’d had a broader range of extrinsic motivational forces to draw from.

According to self-determination theory, there are four types of extrinsic motivation: external, introjected, identified, and integrated. Each grants the learner a different degree of self-determination, or agency. In general, the more self-determined the type of motivation, the stronger its influence. At the lowest end of the spectrum is external motivation, which relies on rewards and punishments—for example, a student who studies a language only to fulfill a graduation requirement. Introjected motivation, on the other hand, is oriented toward values: it’s based on seeking approval and self-esteem and avoiding shame or guilt. For example, students with high introjected motivation may study a language in order to live up to their parents’ expectations. Introjected motivation can be powerful. These students may make a strong effort, but they also tend to experience high levels of anxiety, which can hinder their learning (Ryan and Deci, 2000, p. 61; Krashen, 1982). Still more self-determined is identified motivation, found among students whose language goals are more closely connected to their sense of self. This group includes those who study the language in order to get a promotion at work. Finally, the most agentive form is integrated motivation. This entails a greater level of goal internalization than identified motivation does, although the goal remains external (Ryan and Deci, 2000, p. 62). For example, a student may learn English in order to participate more fully in their professional circles, thereby strengthening their self-perceived legitimacy as a member of those communities.

In this way, self-determination theory paints a dynamic picture in which motivation is constantly developing and sensitive to outside influence. That’s good news for us teachers. Extrinsic motivation can become more self-determined—more intrinsic—through a process called integration (Ryan and Deci, 2000, p. 60). In other words, a supportive teacher can positively influence the motivation of seemingly disinterested students. Accomplishing this requires three conditions. The first is self-determination: students must feel a degree of autonomy in completing tasks, and any external support, feedback, or encouragement must not undermine this autonomy (Deci and Ryan, 1985, p. 128–30). Next is competence, which stipulates that learners must perceive tasks as challenging but achievable (Deci and Ryan, 1985, p. 123). Finally, relatedness requires that the goal be based in “feelings of connection and belongingness, as well as perceptions of caring and being cared for by others”—for example, the kind of relationship that my teacher had formed with her students (Vallade et al., 2020, p. 126). These conditions can help to form a feedback loop where concerted effort leads to success, leading to more concerted effort. The motivational narrative we form about this cycle (or our failure to achieve it) shapes our learning identity.

I experienced motivational integration firsthand this spring, when COVID-19 sent my state, Kentucky, into lockdown. After being cooped up inside for several weeks, I realized that taking up running would offer me a rare chance to get out of the house. It wasn’t the first time that I’d had the idea, but this time, I took a different approach. By doing so, I unknowingly fulfilled the requirements for integration described by self-determination theory. Instead of running a half-marathon, I set a modest distance goal—five kilometers—and made no deadline for accomplishing it. Having realistic goals fulfilled the notion of competence, and I started each run feeling empowered and confident. Instead of relying on an outside training plan, I set my own daily and weekly running plans. This gave me a stronger sense of self-determination than before, when I had held myself to an external metric for how far was “far enough.” Finally, my family provided gentle encouragement as we all tried to make the most of the lockdown, creating a sense of relatedness.

On the surface, this may seem to have little to do with language learning—after all, running and language are very different—but there are parallels. Like running, language learning offers many routes to the same goal.

A teacher who involves students in choosing which route to take enhances their sense of self-determination, making them more likely to invest in the learning process. This could involve students and teacher working together to identify communicative goals and to think of ways to achieve them. In this scenario, the teacher offers their subject-area expertise and students offer expertise about their goals and priorities. This reciprocity positions teacher and students as partners, which can create a feeling of relatedness. Additionally, language learning, like running a half-marathon, can feel like an insurmountable task. Teachers must help students to break it down into manageable pieces—in other words, to promote a sense of competence. Giving students opportunities not only to grow but to recognize and celebrate their successes can help them to rewrite negative parts of their motivational narratives.

After two months in lockdown, I was still running every day. I hadn’t come to love it, but I’d stopped hating it. I’d started to appreciate the opportunity to get outside. I met my five-kilometer goal—and kept going. As I did, my motivational narrative changed. Sometimes, old aches and pains would return, or a run on a particularly hot day would lay me flat. But I discovered a newfound resilience. Because I had so many successful runs under my belt, these isolated negative experiences didn’t hold as much weight as before. It’s been eight months since we went into lockdown, and I’ve kept running—I’ve even begun to look forward to it.

I started running to stave off boredom. I had no idea that doing so would give me not only a new pastime but a deeper understanding of the students who are hardest to connect with. Not every student can bring purely intrinsic motivation to our subjects, but this doesn’t mean that they’re lost causes.

Contrary to popular belief, motivation is not something that students have but rather something that arises out of the learning environment. It is complex, and it can change depending on the narratives that students tell themselves about their educational experiences. As teachers, we need to understand what motivational forces drive our students and establish an environment that will encourage them to invest in the learning process. Self-determination theory offers an understanding of how to do this.
I’ve always thought that I was supposed to help my students learn language. But every student who walks through my door carries with them all of their previous learning experiences. All too often, these experiences have been negative. In those cases, perhaps the most important thing I can do is help them to rewrite the narratives that keep them from engaging. Perhaps sometimes we have to unlearn before we can start to learn.

Katherine Hardin has taught English as a second language in Russia, Germany, and most recently refugee resettlement agencies in the U.S. Currently, she is a PhD student at McGill University, Canada, where she studies adult language education. 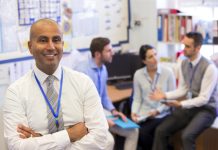 How Can Drama Improve Language Learning?