How Can We Improve our Linguistic or Literacy Skills? 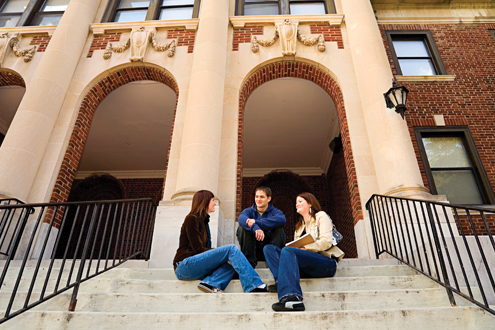 Every January, Language Magazine asks experts in our field to share their opinions on how we should tackle an issue of importance in the New Year

Three Ideas to Improve Linguistic Skills
For a year, the local National Public Radio station located at the University of Michigan has been asking people around the state to offer three ideas for making Michigan a better place and improving its future. Taking a cue from that fascinating project, I want to offer three things I’d like to see happen over the next twelve months that would help students improve their linguistic and/or literacy skills.

2. I’d like to see grassroots school-community partnerships that would establish bilingual internships for high school students to work with people in the community who are multilingual or live in multilingual households. The MLA Language Map helps us visualize how multilingual the U.S. actually is.

3. I’d like to see a federal loan program targeted to undergraduates taking majors in foreign languages. This program would be designed on the 1960s NDEA (National Defense Education Act) model but would be renamed the NFEA (National Future Education Act). Graduates who go on to teach language in elementary or secondary schools and graduates who go on to jobs requiring bilingualism would be eligible to have a certain percentage of the NFEA loan forgiven for up to five years. As we move forward with advocacy, we must keep before us the goal of educating people for the post-industrial digital age, an age requiring different skills, new modes of thinking, new media for communicating ideas and values, and a nimble mind. Learning languages and learning about the cultures in which they are spoken prepare new learners and life-long learners for the tasks and lives ahead, even if they live and work in the U.S.
Sidonie Smith, 2010 President, Modern Language Association, and Martha Guernsey Colby Collegiate Professor of English and Women’s Studies, University of Michigan

A Policy Based on our Multilingual Reality
A positive focus for 2011 and beyond would be for the U.S. to develop a language policy based on the current and historical reality of multilingualism in America. With one out of every six people speaking a language other than English, the U.S. needs to rise to the challenge and tap into the opportunities afforded by such powerful national linguistic resources. There continues to be a disconnect between the language speakers in our population and the languages we teach. Despite the fact that America is the 5th largest Spanish speaking nation in the world, Spanish in the United States is still taught as if it were a foreign language in most public schools and university programs.
What might a policy based on current and historical reality include? Spolksy (2002) has suggested a set of recommendations that are helpful in this connection: (1) policies that ensure there is no linguistic discrimination (cf. Labov 1982); (2) adequate programs for teaching English to all; (3) respect for both plurilingual capacity and for diverse individual languages; (4) programs that enhance heritage languages and community languages; (5) multi-branched language-capacity programs that ensure heritage programs connect with advanced language training programs and overseas-experience approaches that lead to knowledge of, and respect for, other languages and cultures. The time is ripe for the majority of Americans who speak only English to reflect on the positive benefits of speaking more than one language in a linguistically diverse world and acknowledge the resources of the multilingual population in our midst. Going forward, the United States needs a policy climate that values linguistic tolerance as well as linguistic diversity to enable us to communicate and compete successfully on the global stage.
Dr. Terrence G. Wiley, President, Center for Applied Linguistics

The Freedom in Education Act
Instead of my visions for 2011, here are my predictions.
After Arne Duncan gets rid of all teacher education, here are the next steps, inspired by Gov-Elect Scott of Florida, who wants to provide vouchers to all parents and let them send their children to any school they like. This will be followed by:

1. Dismantling the public school system. All schools will be private.

2. Gradually reducing the voucher amount until it is zero. (“Let’s get government out of the education business,” but see below.)

3. No longer requiring school attendance at all. BUT

4. Requiring that each child take standardized, government-approved tests in all subjects every year, as well as interim tests during the year. All tests will be regularly scheduled, and administered and machine-scored by computer. (Arne Duncan’s plans are close to this already. The only function of school is test-prep. Families can choose how they want to do it with no “interference” from the government — online, private school, tutor, or doing nothing.)

6. Not taking the tests is not an option for those under 18. Failing to take the tests results in prison for the parents of those under 16, and prison for the students themselves ages 17 and 18, unless all past due testing-scoring fees, plus interest, are paid immediately. Prisoners will be put to work. Money earned goes to pay past bills for test-scoring fees for tests not taken.
7. No college attendance is required for a degree. All you need to do is pass the standardized competency test for any degree, including MDs. (Like the Bar, but no law school required, like the CPA exam, but no business school required.)

There will be no “education budget” at all. Instead, with 50 million test-takers, test creators and test administrators will take in billions each year from “test-scoring” fees for doing nearly nothing, once the tests are in place. Even if the annual average fee is a mere $500, the total will be about 25 billion, about the same as the current NCLB annual budget. And whenever the feds feel they need to put more poor people in jail, they will raise the test-scoring fee a little.

I think most people would agree to steps one to four with no hesitation, now that everyone is convinced that our schools are “broken” and that private enterprise does everything better. Step five would be easy if the fee is low at first. Step six can be motivated by horror stories placed in the media about lazy people who don’t want their children to learn anything. Step seven would pass tomorrow.
Stephen Krashen, Professor Emeritus, Rossier School of Education, University of Southern California

A Few Modest Proposals
• Proficiency in at least two languages will be a required and central element of “global competence.”
• At least ten states will follow Utah’s lead and fund the establishment of immersion programs.
• For every “free” teacher from China or Spain, states will fund a scholarship for a bilingual American graduate pursuing a teaching license.
• Every college language professor will spend a day in a K-12 classroom.
• Barack Obama will spend an hour a day brushing up on his Bahasa Indonesia.
• School boards will award credit to students for how well they communicate rather than how many years they have survived language classes.
• School districts recognize home schoolers, heritage speakers, year-abroad returnees, and others for their language abilities.
• European language teachers will stop complaining that Chinese is taking over the world.
• Chinese teachers will approach non-Chinese colleagues and learn something from them.
• The Department of Education will realize that foreign languages are the one field with agreement on standards and make it a model for other fields.
• All language teachers will have at least one heritage or native speaker from the community visit their classes, physically or virtually.
• Colleges will give scholarships to students demonstrating proficiency in a language other than English.
• Realizing that bilinguals are more likely to get rich and donate money, colleges will begin recruiting world language speakers.
• Xenophobes will stop complaining that Spanish is an option at ATM machines.
• Districts will stop buying textbooks and use the savings for long-term professional development and balanced assessment systems.
• Language Magazine will have a booth at the ACTFL Convention in Denver.
• Scholars will discover that the Mayan calendar actually ended in 1986.
Happy New Year!
Carl Falsgraf, Director, Center for Applied Second Language Studies, University of Oregon