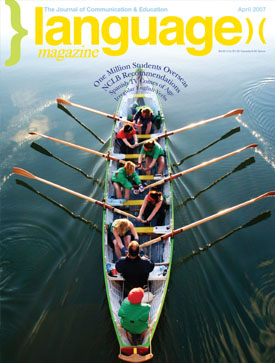 The goal of having a million Americans studying abroad every year (see page 24) may seem superfluous to many in a nation where many children struggle to receive a basic education. Reducing dropout rates and closing the achievement gap are certainly the priorities, but we must also look beyond the failings of our existing educational system and aspire to a system which truly prepares our children to become global citizens.

Spending $800 million to enable college students to study overseas may seem completely unjustifiable when urban school districts are forced to make their students share basic textbooks, but the long-term benefits of increased international experience for American students, and increased exposure to our young ambassadors for people filled with negative perceptions of America cannot be quantified.

This spending should be removed from the educational context in order to make sense. The Institute of Policy Studies, using congressional figures, estimates that the Iraq war costs $5.6 billion a month, whereas this program would cost a mere $6 million a month. This is not to suggest that increasing the number of students studying overseas would put an end to international conflicts. That would be naïve. But, it would be a very cost-effective means of promoting intercultural understanding and reducing the potential for conflict, especially if trips abroad were to be preceded by appropriate language and cultural training.

The program would focus on students who have not traditionally had the opportunity to study abroad, such as those from low-income families, minority backgrounds, or those at community colleges. And the majority of students would not be sent to the typical study-abroad locales in Europe, but instead to developing countries or the Middle East.

The late Sen. Paul Simon tirelessly championed the value of travel as a way to improve greater intercultural understanding. As a direct result of his work, Congress established the Abraham Lincoln Study Abroad Commission to develop the framework for an international study abroad program for America’s college students.

Simon’s plan may become a reality soon thanks to bills moving through both the House and Senate. The House Foreign Affairs Committee unanimously approved the bill by voice vote, sending it to the House floor for a final vote, while a companion bill has been introduced in the Senate.

If approved, the legislation would establish the Paul Simon Study Abroad Foundation, with the goal of annually enabling at least a million American students to study abroad within ten years. The grant program would receive $80 million each fiscal year.

Sen. Richard Durbin, D-Ill., sponsor of the Senate bill and a protégé of Sen. Simon, summed up the current situation in the following statement, “The United States is a military and economic superpower, yet it is continuously threatened by a serious lack of international competence in an age of growing globalization.”
The Paul Simon Act is a step towards remedying this situation, so let your representatives know that you support it.

Creating a New and Improved NCLB Act
As Congress debates reauthorization of the No Child Left Behind Act, The Institute for Language and Education Policy presents its recommendations for reform

Resourceful Interaction
Sarah E. Dietrich explains how to make the most of an authentic information gap