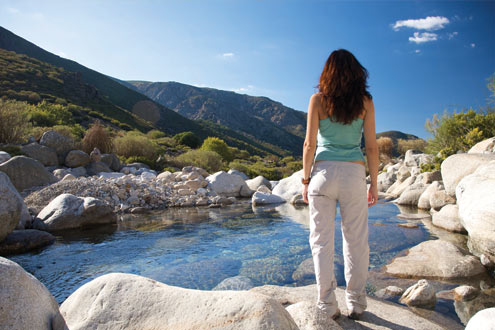 Castilla y León is not only the largest region of Spain, but the historical land which gave birth to Castellano (Castilian Spanish), the legendary hero El Cid, and Saint Teresa of Avila. The elevated plain which boasts more medieval castles than anywhere else in Europe is defined by the mountain ranges Sistema Iberico to the east, Cordillera Central to the south, Cordillera Cantabrica to the north and by the River Duero towards Portugal.
History and legend have come together here to create a magical atmosphere so it is hardly surprising that Walt Disney used Segovia’s Moorish fortress as the inspiration for his famous fairytale castle. The ancient kingdom of Castilla (or Castile) was first united with the neighboring kingdom of León in the early part of the 11th century. It takes its name from the many castles built by the Christians as a defense against the Moorish invaders in the 8th and 9th centuries. In the early years of Arab domination, the region was at the vanguard of the centuries-long battle to oust the Moors. The most famous champion of the Christian reconquest was El Cid el Campeador who was born in Bivar near the city of Burgos and whose coffin lies in the city’s truly magnificent 13th century cathedral (yet another of the region’s many World Heritage sites).

Students from all over the world come to absorb the rich history of the region and benefit from its impeccable educational tradition.

The region’s capital, Valladolid, has one of the most important sculpture museums of all Spain, and the famous Easter week processions are of great tourist interest. The city itself is monumental, and it is surrounded by innumerable castles. It is also claimed that the city’s inhabitants speak the most pure form of Castilian Spanish. Valladolid began to become important from the 11th century, when Count Ansúrez came to govern the city in the name of Alfonso VI. It reached its peak during the reign of the Catholic Monarchs (15th C.), when the university became one of the most important in the country. And, as well as playing a leading role in key episodes in Spanish history, Valladolid has twice been the capital of Spain, firstly with Carlos I (16th C.) and later when Felipe III came to the throne (17th C.). Of particular interest to American students are the Casa de Cervantes, where the icon of the Spanish language gave the finishing touches to his masterpiece Don Quijote, and the Christopher Columbus House-Museum, where the navigator spent the last years of his life. Nowadays the palace exhibits various pieces and documents related to the discovery of America.

The golden city of Salamanca (so-called because of the yellowy-red sandstone used in the construction of many of its ancient and modern buildings) is home to Spain’s oldest university which was founded in 1218 by King Alfonso IX. It is a city of outstanding beauty and rich cultural heritage.

Segovia’s most famous monument is certainly its colossal Roman aqueduct which dominates the town. Additional attractions include the Alcazar and the Gothic cathedral.

The fortified medieval town of Avila, the birthplace of Saint Teresa, is one of the biggest tourist attractions in the whole of the region. It is still encircled by 11th century walls with nine gates and more than 80 look-out towers.
Besides its vast wealth of historic and cultural treasures, Castilla y León is also blessed with some of Spain’s loveliest scenery including dramatic mountain landscapes and protected nature reserves inhabited by the rare Iberian Lynx and brown bears. One of the most stunning protected reserves in Spain is the Sierra de Gredos.

University of Vallodolid
The history of the University of Valladolid stretches back over 700 years, making it one of the oldest universities in Europe and one of the leading centers of higher education in Spain. University of Valladolid therefore plays an important role as one of the key institutions for learning Spanish in Spain. Spanish courses are held in an open and friendly environment in the new Miguel Delibes University campus. The University offers a wide range of courses at all levels and the curriculum is wide-ranging, aiming to combine a practical knowledge of Spanish with immersion in various cultural aspects of the country through its history, art, and literature. Valladolid offers experience in teaching, historical heritage, and cultural traditions. The combination of these features offers a strong option for studying and experiencing Spanish culture in its natural environment. It is a medium-sized city that is safe and pleasant for walking around and boasts a hospitable atmosphere.

The Universidad Europea Miguel de Cervantes (UEMC) is a private and independent university created in 2002. It is characterized by its international focus, personal treatment of students, and aims to provide the best theoretical preparation and practice for future professionals. The UEMC is a certified testing center for the Cervantes Instiute DELE exam and offers the possibility of studying Spanish in a personalized way according to the different levels, in small groups and with a maximum of 15 students per classroom.

Tía Tula Colegio de Español
Tía Tula is a lovely modern Spanish language school in the historic center of Salamanca. It is a location bustling with student and tourist activity, surrounded by the main monuments of the city.

The teaching staff is composed of experienced instructors specializing in teaching Spanish as a foreign language. Staff meet continually to track each student’s progress. Classrooms are spacious and light, with big windows and balconies featuring views of the monumental center, all with the modern audiovisual tools (internet connection and wi-fi included) and air conditioning.

The administrative staff helps students to feel at home in Salamanca, assisting students in whatever they may need: information about life and cultural activities in Salamanca, planning trips, organizing extracurricular activities, and selecting accommodations according to the student’s needs.

Letra Hispánica
Letra Hispánica attracts students interested in the wide array of Hispanic cultures. Students, as well as participants in other programs, are offered individual instruction that attends to special needs and requests. The teaching philosophy is based on the old motto “enseñar deleitando,” which in English means, “To teach so that learning is enjoyable.” Teachers strive for each student to acquire theoretical knowledge in the classroom as well as knowledge based on experience in the real world, which is why the school promotes personal contact with professors, intellectuals, writers, and artists, in addition to other students from Salamanca. The genuine regard for Hispanic cultures results in dedication, enthusiasm, and a staff committed to a vision without stereotypes. It is located near the center of Salamanca, which is full of monuments of great beauty and historical value. In addition to the quality of educational aspects, the school provides accommodation with carefully selected families, apartments, residences or shared flats. Cultural activities are available in the evenings and thematic trips are available on the weekends so that students may better understand the Spanish culture and landscapes.

Colegio Delibes
Recognized by the Instituto Cervantes and situated in a historic building near the the Plaza Mayor in Salamanca, Colegio Delibes has been recently restored and equipped with the latest technology. The school features twenty air-conditioned classrooms, a video and conference room, an audio lab, library, and an IT room with free internet and wireless access. There is also an enclosed patio with a Castilian well where students can relax with a coffee and socialize during breaks. The college is best characterized by its international student body (3000 students from 55 different nationalities during last year) with a complete program of extracurricular activities, most of which are free of charge for students of the school. Accommodations vary between host families, student residences, shared apartments, studios, and hotels. Colegio Delibes is known for its intensive, wide-ranging courses, small class sizes, and personalized attention: the staff strives to help students feel at home while living abroad. The school works with U.S. universities and high schools and it is possible to obtain college credit.

Hispano Continental
Hispano Continental is located in the historic center of Salamanca, close to the famous Plaza Mayor and at the heart of the city: cinemas, bars, restaurants, and an immense variety of shops are all easily accessible. The school, founded in 1989 with the aim of creating a pleasant atmosphere in which to learn Spanish, has seen increasing numbers of students from all over the world in attendance. The school is characterized by personalized instruction, allowing students to progress easily and rapidly. Groups are small and students can begin courses every Monday of the year. Hispano Continental offers a wide variety of extracurricular activities and a full cultural program to all its students. The school also organizes specific courses and activities for individual groups. Many U.S. universities and high schools have formed study abroad partnerships with the school which it attributes to its ability to adapt to each school’s needs.

ENFOREX
Enforex, a large and prestigious organization specialized in teaching Spanish as a foreign language, gives students the opportunity to integrate into the Spanish life. The school is located in the center of the gorgeous “Golden City” of Salamanca, home of some of the most fascinating architecture in Europe. A city with many students and vibrant nightlife, this European culture capital stands out with its stunning Old Town and beautiful Plaza Mayor. The school offers six different levels of Spanish which are divided into three sublevels, ensuring that there is an appropriate level available for each student. Courses start every Monday of the year in a renovated and modernized former convent with a large patio and salamantino adornment throughout. Enforex welcomes students to be a part of over 35,000 students from more than 72 countries joining its programs every year.

I.T.S.
I.T.S. began operation in 1993 as a school specializing in courses on interpreting and translation. These specific and high-level courses were, and still are, geared towards future interpreters and translators and also towards professionals currently employed in this field. Since students who had not yet attained the level of Spanish required for interpreting and translation courses wanted language courses at lower levels, the school began to offer general courses in Spanish at six different levels. As the Spanish courses are divided up into modules, students can design their own course of study and tailor it to their needs. The modular system is particularly flexible at higher levels, where students can chose from eight different offerings. This way of organizing courses is appealing to a wide cross-section of ages ranging from 18 to 70. All teachers have ample experience in their specialization, whether it be interpreting, translating, or Spanish as a foreign language.

Soria
Since 1996, The Official Chamber of Commerce and Industry of Soria Province (EISORIA) has organized Spanish Courses and Practical Trainings. This is an accredited center of the Cervantes Institute, in collaboration with Valladolid University. The main target of the Chamber is offering Spanish studies that are linguistically and culturally focused, combining language lessons with games, sports and cultural activities. This year’s courses are July 4-29 or August 1-26. Students may live with local families, in residence halls, or in apartments. The Official Chamber of Commerce of Soria gives students the opportunity to fulfill professional training in local companies. Training positions can start at any time of the year and, while any length of time is acceptable, a minimum stay of three months is recommended.