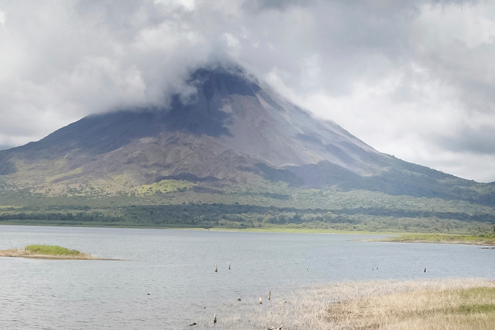 International travelers’ thirst for activities that delve into the genuine culture of their hosts has grown in popularity over recent years. Granted, lounging on a tropical, palm-lined beach or zipping along the canopy cables through cloud forests tend to top the itinerary of most visitors to Costa Rica. But, why not enrich the experience by adding a local festival in between white water rafting, museum visits, and nature hikes? In Costa Rica, authentic cultural opportunities are abundant and the locals, affectionately known as Ticos, welcome tourists to participate.

Initially religious influences, specifically Catholicism, played a predominant role in the establishment of local celebrations in which a patron saint is honored. However, in the 21st century these events, while not losing the original concept, reflect a strong sense of local community with typical food from the region being served, along with festive music and dances, parades, and dancing horse exhibitions. Here’s a roundup of some of the more popular festivals:

The Day of the Ox Cart Master
Celebrated in San Antonio de Escazú, in the province of San José, on the second Sunday of March, the oxen drover and his brightly decorated wooden work cart represent both economic welfare and cultural identity. Historically, the cart was used for agricultural work, but it later also became a canvas for decorative painting by skilled artisans who handed down their knowledge from generation to generation.

This celebration includes a parade of the hand-decorated carts, with children, teens, and adults riding along dressed in traditional costumes. Drawing visitors from the entire Central Valley and beyond, this festival epitomizes the pride of the Costa Rican people in their traditions, history, and the importance of the farmer to the socio-economic development of the nation.

Juan Santamaría Day
April 11 is the day selected to commemorate the national Costa Rican hero Juan Santamaría, a barefoot and humble soldier from the province of Alajuela who sacrificed his life in the 1856 battle against the invading troops of William Walker. Walker, a North American filibuster, sought to establish slavery south of the U.S. under the Manifest Destiny ideology. Juan Santamaría represents the courage of the farmers who helped build the country and a love for country — two very important Costa Rican traits. Concerts and community parades with marching school bands are typical during this day, and proud parents line the streets to see their children in traditional dress play their instruments.

The Day of the Virgin of the Sea, the Virgin Carmen
July 16 is the day dedicated to honoring the Virgin of Carmen, protector of sailors and fisherman sailing from the Pacific coastal town of Puntarenas, out of the Gulf of Nicoya. Demonstrating the importance of fishing to this region, working fishing boats and yachts are decorated for the show along the coastal waters. One specially selected boat transports the image of the patron virgin of Puntarenas. Mass is followed by a parade and the evening celebrations include dances and fireworks.

Guanacaste Day
Dedicated to the celebration of the annexation of Nicoya to Costa Rica, July 25 is especially festive in the province of Guanacaste with large local celebrations, dances, running of bulls, agricultural fairs, and concerts. Some of the typical fare served this day include: arroz de maíz (finely chopped dried corn cooked with chicken broth and meat), buñuelos (sweetened fine corn meal balls bathed in sugar cane syrup), gallos de gallina achiotada (corn tortilla topped with achiote flavored chicken), sopa de albóndigas (chicken meatball soup), pozol de chancho (pork and corn stew), tanelas y rosquillas (clay oven baked breads), horchata (a ground rice and peanut drink flavored with cinnamon), atol de maíz pujagua (soft purple corn pudding), and chicha (a fermented corn based alcoholic beverage).
The people of Nicoya, in a public event called cabildo abierto, the equivalent to a modern referendum, decided to annex the Partido de Nicoya to the Republic of Costa Rica. On July 25, 1824, Nicoya was formally annexed to Costa Rica. Since then, the coat of arms of Nicoya states the words: “De la patria por nuestra voluntad” which could be translated as “part of the nation because of our own free will.”

Mother’s Day and the Day of the Virgin of Los Angeles
Both of these holidays are celebrated during the month of August. Regardless of the day of the week, Mother’s Day is always held on August 15 and is linked to the Ascension of the Virgin. Mother’s Day is a much revered national holiday with all public and most private institutions closing their doors. It is a day spent with the entire family — sons, daughters, grandchildren, and great grandchildren — all celebrating the female head of the family.
The Day of the Virgin of Los Angeles is equally important in the Costa Rican culture. It is common in Latin America for each country to have a patron Virgin; Costa Rica is home to the “Virgin of Los Angeles.” From all over Costa Rica, “pilgrims” walk either from their hometowns (those from far away may walk for up to a week) or San José center to arrive to the National Cathedral in Cartago on August 2. Pilgrims embark on the romeria to offer thanks to the Virgin de Los Angeles for answered prayers and miracles. It is customary to enter the cathedral kneeling, arriving to the altar to visit the Virgin — a small black rock shaped in the form of the Virgin which has been decorated with gold filigree.

Day of Cultures (formerly the Day of Race)
In 1994, Costa Rica renamed this October 12 celebration the Day of Cultures, officially recognizing the mestizo or culturally/ethnically mixed nature — European, Indigenous, Afro-Caribbean, and Asian — of the Costa Rican population.
The two main sub-cultures within Costa Rica are the Afro-Costa Rican and Indigenous cultures. During October, the Province of Limón, on the Caribbean Sea, celebrates culture with a lively carnaval complete with colorful Caribbean costumes, parades, and dances. While the seven indigenous groups, which comprise 1.7 percent of the today’s population, do not celebrate this October festivity with an official parade, each group is proud of their cultural heritage and seeks to maintain their traditions.