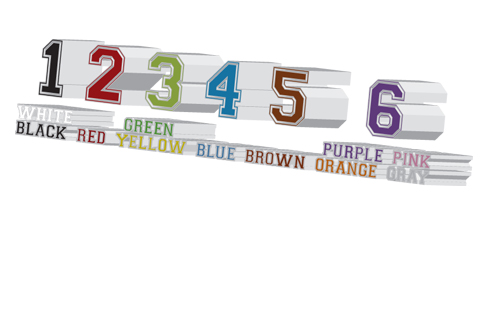 We tend to think of colors as ideas on which all humans agree — grass is green,
flames are orange, the sky is light blue — even if different languages have different names for these colors. As English speakers, we think of color names in terms of the “basic” ones and the more
specific, secondary ones (turquoise, beige). Think of the words that are taught to young
children for color. A quick look at baby books shows that English generally has 11 basic color words:

Many people are surprised to learn, therefore, that different languages do not consider the basic colors to be the same. This was true of ancient languages — Latin originally lacked a generic word for “gray” and “brown” and had to borrow its words from Germanic language sources; Classical Greek is said to not have had different names for blue and black. It is also true, however, for languages spoken today. Some spoken in the New Guinea Highlands still have terms only for black and white — perhaps better translated as “dark” and “light.”

As another example, Hanuno’o language (spoken in the Philippines) has only four basic color words: black, white, red and green.

Looking at the chart below: Berlin and Kay’s landmark study (1969) of 98 languages showed that if a language has a name for a color in a higher-numbered column it always has a name for the ones to the left (if a language has only two color words they will always be white and black; if it has five they will always be white, black, red, green and yellow).

While some of the particulars of this research have been debated, the notion persists that “basic” colors may be relative for a person and are influenced by language. Perhaps unsurprisingly, studies have shown that people can remember and sort colored objects more easily if their language has a name for that color. Linguist Stephen Pinker affirms in the 2007 update of his classic treatise The Language Instinct that Berlin & Kay’s findings are essentially accepted. Following are some other specific examples of how different colors are dealt with in various languages:
• Russian has two different basic words for blue and light blue: and .
• Hungarian has two different basic red words: bordó (darker reds) and piros (lighter reds).
• Hindi has traditionally had no standard word for the color “gray.” However, lists for child or foreigner Hindi language learning often include “saffron” as a basic color in addition to orange, yellow and red.
• Navajo has one word for both gray and brown and one for blue and green. It has two for black, however, distinguishing the color of “coal” from that of “darkness.”
• Many languages do not have separate terms for blue and green, instead using one term for both. Linguists sometimes use the term “grue” to describe such words. In Vietnamese, for example, both tree leaves and the sky are described by the color word xanh.
• Both Japanese and Korean do have separate words for green and blue, but the distinction is not always made in the same way that English makes it. A green traffic light, for example, can be called the “blue” light in both languages. Likewise, in Thai the word that means green is also used to describe the sky.
• In Welsh language (part of a different language family from English), the word for “blue” traditionally covers not only what English speakers would call blue, but also parts of green and grey as well; gwyrdd is yellowish-green, glas is greenish and grayish blues, and llwyd is gray which is not blueish. However, in contemporary Welsh the words have come to correspond more with English.
• Similarly, Shona language (a Bantu language from Southern Africa) has no one word for our “green” concept; they have one word for yellowish-green, and a different word for bluish-green.
• Bilingual speakers of English and Kwakwa’la (a native language of Vancouver Island) demonstrated that they use the words “yellow” and “green” when speaking English but refer to the catch-all term ibenxa for both colors when speaking Kwakwa’la.
• Some languages have color verbs. As an example, the Lakhota (a Native American language of the Sioux family) verb gigí means “to be rusty brown,” and skaská means “to be white.”
It should be pointed out that popular, everyday concepts of “basic” color differ from scientific ones, no matter what language is being discussed. For example, English speakers use the mnemonic device “Roy G. Biv” to memorize the sequence of colors in a spectrum (red, orange, yellow, green, blue, indigo, violet) — but few English speakers would call indigo a “basic” color. Incidentally, English is not the only language with such a mnemonic device. Russian, for example, has this one:

Color and Culture
Cultural color associations can differ widely. Western brides consider a white dress to be traditional, and in Anglo-American culture, wearing “something blue” is equally traditional. In some Asia/Pacific countries, however, it is customary for brides to wear red. We wear black to funerals; in India it is common to wear white. In Western cultures, purple is often associated with royalty — an association which does not exist in other places. Christians think of heaven as white or blue — in the Koran, the term for “greenness” is found in several verses to describe the state of the inhabitants of paradise. For the Chinese, the color red is strongly associated with good luck, an association most Westerners don’t have. In traditional Cherokee culture, colors are associated with the four directions: blue (north), white (south), red (east) and west (black).

Flag colors often symbolize countries, to stronger or lesser degrees. “Red, white and blue,” as a combination, signals “America” to Americans, but not necessarily to others. Colors can also signify social identity. For example, In British Isles cities where Catholic and Protestants have a history of conflict, the use of green (Catholicism) or Orange (Protestantism) in certain contexts is seen as taboo.

Color Idioms
It follows, then, that colors are used in very different ways in different color idioms across languages. In my university English as a Second Language classes, I do a lesson with my students which they find both practical and entertaining — reviewing some of the common color idioms that we have in English. If you have not given this topic any thought before, you may be surprised at how many we have in English. These are often idioms in the truest sense, because they have figurative meanings that one probably could not “guess” from the color associations themselves (“yellow-bellied,” “once in a blue moon”). My lesson, and the subsequent discussions it prompts, has enabled me to collect some non-English examples.

The seeming arbitrariness of many color idioms is underscored by the fact that in other languages these colors have different associations and are used in idioms with completely different meanings. When Korean speakers say that someone has a “black heart” they mean he has an ulterior motive — nothing to do with the cruelty idea it connotes for us. A thriller novel in Italian is un libro giallo (“a yellow book”), unrelated to the scandal-mongering notion of our “yellow journalism.” In English, “he is blue” means he’s sad. The German translation, however, er ist blau, means “he is drunk.” We use a “white lie” to avoid hurting someone’s feelings. For Turkish speakers, this is a pembe yalan — a pink lie. Korean speakers go one step further with the “lie” color idioms. They speak of “a red lie,” which means a lie which everyone knows is a lie.

A lot of French color idioms are already familiar to us (film noir, la vie en rose, carte blanche) but did you know rire jaune (“to laugh yellow”) is to give a forced, insincere laugh? How about faire quelqu’un marron (“to make someone brown”), which means to cheat on someone? Here’s a question: is inexperience blue or green? The French say être fleur bleue (“to be a blue flower”) for naïveté. The Japanese seem to side with the French — they say an inexperienced person has “a blue butt.” We English speakers, on the other hand, might say “she’s so green” about the unseasoned colleague. That is, unless we add “with envy,” in which case we are talking about something else entirely. Of course, “that company is very green” probably refers to being environmentally aware.

Green seems particularly rich with idiomatic meanings across languages. French has vert de peur (“green from fear”). In some dialects of Spanish, ponerse verde a uno (“to become green to someone”) means to tell someone off. I might imagine a heated U.N. debate whereby an angry Spaniard becomes green to a Frenchman, who in turn becomes green with fear. This situation may not necessarily impress the Russian delegate, who feels
(“green boredom”) — utter boredom — at the all-too-familiar situation. On the other hand, the reaction from the Thai delegate might be that “her body turns green” (she becomes angry), especially if she supports the French. Perhaps, to lighten the mood, the Spaniard will tell a chiste verde (“green joke”) a dirty joke — once he has cooled off. All of this is of less concern to the Italian delegate, who has bigger problems: he is al verde (“at the green”) — by which one means he is broke. (The American allegedly tried to embezzle some money for him, but sadly he was caught red-handed, so the Italian remains in the red).

Speaking of red, as Berlin and Kay noted, if a language has only one lexeme for a color besides black and white, it is red. It should be no surprise, then, that there are many good “red” idioms. Here’s a sample. The Russians say (“red roof”) for a place illegally protected by police. Arabic speakers say “show the red eye” for being strict with or disapproving of someone. Speakers of Mandarin say “he is big red and big purple” for someone who is popular and famous. In Japanese, a “red child” is a baby. Italian speakers calling the egg yolk the rosso d’uovo (“red of the egg”) may seem illogical, until we remember that we English speakers call people with orange hair “redheads.”
Whether or not, and to what extent, color words in one’s native language affect one’s worldview is part of a larger concept that linguists will no doubt continue to debate. The existence, or pervasiveness, of linguistic relativity is certainly a “gray area.” Nevertheless, there is something satisfying about this cornucopia of color idioms; they support the idea that we humans, despite globalization, continue to maintain cultural idiosyncrasies which differentiate us. We want these cultural differences to exists — and when they are brought to our attention, they may make us feel that, as Portuguese speakers say, está tudo azul “everything is blue” — that is, all is right with the world.

Notes
• “Gray” is also spelled “grey,” which is sometimes referred to as a British spelling, although that distinction seems to be on the wane. Nowadays you will hear that it is simply spelled both ways
• The “basic” word in English for purple color is sometimes “violet.”
• Let’s leave aside for the purposes of this analysis that “black” and “white” may not, strictly/scientifically speaking, be colors.

Kenneth S. Horowitz (khorowitz@email.pucpr.edu) is a professor in the Department of English, Pontifical Catholic University, Mayaguez, Puerto Rico. He has been an English teacher on the sunny Caribbean isle of Puerto Rico for 13 years, where he has worked with students who have been raised with English virtually their entire lives yet still see it as something foreign. He has a BA and MA in ESL and teaches undergraduate English courses from the basic level to ESL majors working towards board certification. He is currently working towards completing his Ed.D in ESL.