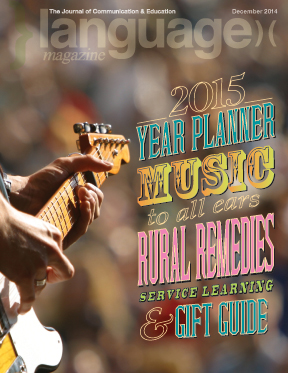 For decades, we’ve been hearing how artificial intelligence (AI) will replace human brain power in all areas, but especially language — where claims that automated translation and interpretation would make language learning redundant abound. However, linguists and educators can now rest easy, according to someone who knows what he’s talking about — Ray Kurzweil, the inventor of speech recognition, who recently said, “We’re not on the threshold where computers can deal with natural language on human levels.” He has long predicted that computers are going to match human intelligence in 2029, and soon thereafter become smarter, but even then, we should see AI as a tool rather than as competition.

This futurist, whom Forbes magazine called the “rightful heir to Thomas Edison” and currently is director of engineering at Google, sees technology as a means to make us stronger — to help us learn more, not to replace our own processing power. “We can learn more languages. We’ll become better at it as we make ourselves smarter,” he said at a conference last month.

“Language is not just a complete redundancy, as I’m sure you appreciate. Different languages have different metaphors and different idioms and can express things in poetic ways that you just can’t do in another language. There are French expressions, Yiddish expressions that you can’t communicate in the same way in English. That’s a general phenomenon, so preserving languages that are about to go extinct is… a very worthwhile endeavor. It’s preserving a very valuable part of our human knowledge, both to study popular languages and orphan languages,” he explained.

Kurzweil even thinks people will soon be able to augment their brain power by using the cloud. In a recent keynote, he said it’s now possible for researchers to simulate regions of the neocortex, a part of the brain that handles high-level thinking, based on data gathered from brain scans. The human neocortex has a limit of about 300 million “modules” that control how humans learn, recognize, and implement patterns, and it’s also where the ability to invent comes from. One reason why children are able to learn so quickly is that they have lots of unused neocortex modules.

The neocortex has served humans well so far, but it could use an upgrade, Kurzweil said. If people could access additional neocortical resources based in the cloud through nanobots, this could enable them to do things like read books and learn new languages more quickly.

“I have 300 million modules, but if I need a billion for a few seconds, I can access more neocortex in the cloud and think deeper thoughts,” Kurzweil said in the keynote. “We’re going to merge with this artificial intelligence we’re creating and make ourselves smarter.”

Without presuming that technology necessarily improves our lives, we should embrace it for what it can do to help us. Instead of fearing that computers will replace people and obviate our need and desire to communicate in multiple languages, we should make the most of them as a means to enable us to learn better, teach better, and even think better.

Making the Most of Playtime
Stuck for a last-minute gift? Consider these educational toys and games