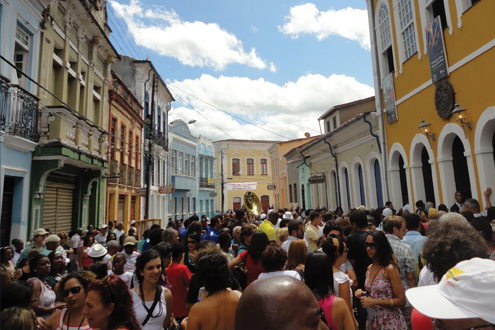 Clara Ramos is the coordinator of the Portuguese and Culture Program at the Associação Cultural Brasil-Estados Unidos (ACBEU) located in Salvador, Bahia. ACBEU hosts the study abroad programs of some of the strongest Portuguese departments in the U.S., including Brown University, Dartmouth College, Northeastern University, UCLA, UC Davis, UC Berkeley, and UT Austin. Language Magazine interviewed Ramos to find out about ACBEU and what it takes to be a successful language center.

Language Magazine: Thank you for taking the time to talk to us. Could you tell us a bit about ACBEU?

Clara Ramos: ACBEU is a non-profit, cultural and educational binational center. As the name implies, the institution’s main goal is to strengthen ties between Brazil and the United States. ACBEU achieves this goal by promoting a broad range of bicultural enrichment programs and educational exchanges as well as teaching Portuguese as a second language and English as a foreign language. The PAS (Public Affairs Section), responsible for overseas educational and cultural programs of the U.S. Government, has classified the center as being one of the outstanding cultural and educational institutions in the field in Brazil. ACBEU is composed of five campuses with a theater, a library, and an art gallery.

LM: How did you get into international education?

CR: I began my career in international education accepting the challenge of taking on the Portuguese and Culture Program at ACBEU in 2000. When I was invited to coordinate the program, in 1999, I had never imagined that a degree in psychology would be fundamental to the success of the program’s implementation. Having lived in London for five years and having studied psychology there, I can better understand what the students are experiencing as they study a language in the country where it’s spoken in a culture totally different than theirs.
The program has contributed to the generation of new “Brazilianists,” which has helped spread our language and culture in the U.S. That’s the most rewarding aspect. Therefore, I can say that I have accomplished what I set out to do 14 years ago.

LM: What are some of the scholarship programs for Brazilian studies or language studies that have sent students to ACBEU?

CR: We’ve had students from the programs at UCLA and the University of Illinois, Urbana-Champaign who had Foreign Language and Area Studies (FLAS) grants. Some of these are graduate students working towards a master’s or doctorate, which attests to the quality of the program. In 2012, UT Austin’s Department of Spanish and Portuguese created a fellowship to support graduate students who want to study in Brazil.

LM: Why do you think that ACBEU has been so successful with American
universities?

CR: I believe that the program’s success is due to three factors: First, the city of Salvador — the climate, Afro-Brazilian culture, the history since Salvador was Brazil’s first capital city, the hospitality of the people, and the natural beauty, with beaches and the Atlantic Ocean. Second, our host families receive the students with open arms, offering attention and affection. And third, the quality of the Portuguese language and Brazilian culture courses that ACBEU offers, with instructors who have been highly trained in both Portuguese as a second language and English as a second language.

We started out with just one university, the University of California Education Abroad Program, and now we have twelve partner schools and receive students all year for both semester and summer programs. Even though we are not a university, we offer courses taught by the most reputable professors from Bahian universities. Our biggest challenge has been maintaining the essence of the program with the academic rigor it has so that students can have authentic experiences and not just touristic ones.

LM: What are ACBEU’s plans for the future?

CR: ACBEU’s been recognized as an outstanding binational center with the mission of promoting education and culture, using innovative technology, and contributing to the development of citizens of the world. So ACBEU is planning to expand the Portuguese and Culture Program by forging new partnerships and arrangements with European and Asian universities, opening up possibilities for students from other cultural backgrounds to learn Brazilian Portuguese and get to know Brazilian culture.