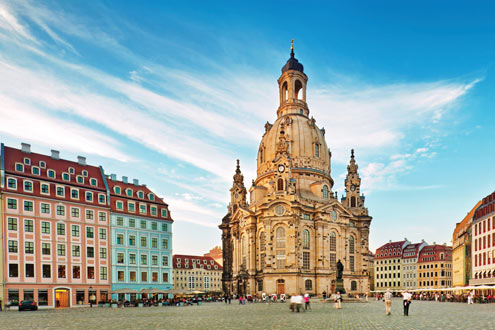 More people speak German as their mother tongue than any other language in Europe. Germany alone has 83 million inhabitants and German is also an official language of Austria, Switzerland, Luxembourg, and Liechtenstein. And, it is the native language of a significant portion of the population in northern Italy, eastern Belgium, the Netherlands, Denmark, eastern France, parts of Poland, the Czech Republic, Russia, and Romania, as well as in other parts of Europe.

Many people also learn German as a second language. It is the third most popular foreign language taught worldwide and the second most popular in Europe and Japan, after English.

Knowledge of German can greatly improve employment opportunities — Germany has the largest economy in the European Union and the fourth largest in the world. From cars to machinery and industrial equipment, from pharmaceuticals to household goods, German businesses earn a third of their income through export, and a quarter of all jobs depend on exports. The competitiveness and desirability of German products are evidenced by the country’s substantial trade surplus, which continues to grow every year.
However, there is much more to German than economics — it is still a leading language of science, literature, art, philosophy, and history. Probably as a result of these expertises, Germany is also probably the world-leader in environmentalism, which looks set to offer some of the most exciting careers in the next few decades.

This is a land of Bach and Mendelssohn, Wagner and Goethe, Robert Schumann and Johann Böttger. This is also the land and its people who played a huge role in bringing about the fall of Communism, when tens of thousands of people took to the streets to protest in Leipzig. A unique cultural landscape exists in the very heart of Europe. East and West meet here.

On the other hand, Germany is renowned for its urban chic, and its modern take on design and architecture has had a worldwide influence. It truly is a country of many contrasts.

did deutsch-institut
With centers in Berlin, Frankfurt, Hamburg, Munich and other German cities, did deutsch-institut has been teaching German as a foreign language for more than 40 years, and is one of the largest (more than 5,000 students per year) providers of German immersion programs. The institute is officially acknowledged by the German Language Society and a member of EAQUALS (European Association of Quality Language Schools). ddi prides itself on giving excellent advice not only during the language course, but also before arrival; their service team makes sure students find the course and location that best fit their goals.

Goethe-Institut, Dresden
The Semper Opera House, the Frauenkirche (Church of Our Lady), baroque architecture, and the world famous art collections — these are all features that come to mind when one thinks of the “Florence of the Elbe,” Saxony’s capital, Dresden.

About twenty minutes from the historical old part of Dresden is another interesting meeting point for travelers from all over the world: the Goethe-Institut. Located in Neustadt, Dresden’s youngest and liveliest quarter, which is mostly inhabited by students, artists, and young families, the Goethe-Institut offers German-language courses for all ages and all purposes. Whether one wants to prepare for studying at a German university, refresh German for professional reasons, or enjoy studying a language together with new international friends in a rich cultural setting, the Goethe-Institut offers options including intensive courses of two or four weeks, individual instruction or company courses, German for school classes, and seasonal courses with a special focus on culture. If needed, living accommodations can be arranged. In the afternoons as well as on Saturdays, students can practice their German by participating in one of the numerous free-time activities. The Goethe-Institut Dresden also offers monthly language examinations at all EU Council reference levels.

International Projects Youth Summer Program
International Projects offers summer courses in Oberwesel, at a camp is situated in a region of outstanding natural beauty, where young students (10-15 years old) have the opportunity to improve their German and meet students from Germany, Spain and other countries on the banks of the Rhine. The international team hosts students at the historic castle of Schönburg, situated just a 15 minutes walk away from the town center on a hilltop overlooking the River Rhine and the town of Oberwesel.

The lessons take place in the traditional classrooms in the castle. The IP Ocean Lounge is also situated in the castle and offers the possibility, to relax, meet friends and listen to music.

The IP Fruit ‘n’ Fit Corner offers water, tea and fruit all day long. Sports on offer include table tennis, swimming, soccer, basketball and volleyball. Students can also express their creativity by joining one of the workshops like dancing, theater, arts and crafts, or health and beauty.

ASTUR
Specializing in youth travel, ASTUR has been organizing language stays and class tours in Germany for 25 years.
ASTUR works with more than 3,000 host families all over Germany to offer a vast array of choices — from Academic Year up to International Summer Camps and Courses, One-to-One-Stays and Immersions.

The International Summer Camps for 9-16 year-old students take place in a residence with full-board accommodation. With 24 hours supervision a day students combine interactive lessons held by native speaking teachers with an interesting activity program, which is organizing by the international team. The German and international students learn together up to four different languages (German, English, French or Spanish) in an international atmosphere.

In addition to the residence accommodation, ASTUR offers International Summer Courses for students, ages 12-22. Accommodations in host families allow international students to learn more about Germany, the language, and the culture.