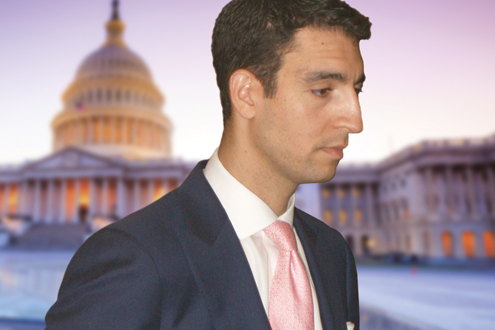 With his basic Spanish and fluency in Arabic, Mohamed Abdel-Kader’s term as deputy assistant secretary in the office of International and Foreign Language Education (IFLE) at the U.S. Department of Education will be short but may be decisive

Since September of last year, Mohamed Abdel-Kader has overseen the International Foreign Language Education team at the U.S. Department of Education, managing two sets of grants: the Title VI programs, which invest largely in capacity at institutions across the country for less commonly taught world languages and world area studies, and the Fulbright Hays programs, which invest largely in small groups and individuals to help them study abroad and hopefully bring that fantastic experience back into the classroom or into whatever environment they operate in.

Mohammed is proud to have been born in New York City to two newlywed immigrants who had just graduated from college in Egypt. They were two young physics majors who had met in a physics lab and were very much in love and a few weeks after they got married, they chose to come to the U.S. instead of going to the UK, thanks to a friend.

Mohammed spent a lot of his childhood going back and forth between New York and Cairo, and early on, on the playground, he had to learn very quickly how to explain what was happening on the other side of the world. This was back in the early ’80s, when the Iran hostage crisis was still very fresh on a lot of people’s minds. “A lot of people said things that weren’t very flattering, but very quickly put me in a position where I had to learn about other parts of the world and articulate what was going on in a way that helped me not get beat up on the playground. It’s not always the most fun story to tell, but I always illustrate that even at an early age little kids are having to think about other parts of the world,” remembers Mohammed.

He also saw the other side of the coin: “When I’d go see my cousins in Egypt and I was playing soccer, folks would always ask me, ‘Well, what’s it like in America? Do you have a Ferrari? Do you have a Lamborghini? Do you run around with guns like Rambo?’ I had to explain to them that that wasn’t really the case either.” After a two-year stint at an international school in Saudi Arabia, he and his family moved back to Clemson, South Carolina, a few weeks before the start of the first Gulf War. So again, he quickly found himself having to explain what was happening on the other side of the world, this time as a seventh grader. “I didn’t always have the answers, but it forced me to dig in a lot.”
As a political science major, he became very interested in various parts of the world and the Middle East in particular. As he explored his heritage and tried to bridge the understanding gap, he realized that he had to articulate what he knew to be a reality on the other side of the planet and became inspired by the role of higher education. Involved in student government at Clemson, he got to work with the university’s leadership and see how a university like Clemson, a state-funded land grant, had an impact on economic development and on helping young kids, who in many cases had never been outside of a two-hour radius of their homes — especially because it encouraged study abroad.

After 9/11, Mohammed studied higher-education policy in graduate school and took an interest in the development of American institutions taking their products overseas. “I kept thinking to myself how powerful it would be if we took the land-grant model overseas into sub-Saharan Africa and what it would do for economic development, or what it would do in the Middle East, or what it would do in China or India and all these emerging economies. I was very excited by that idea and I was also very happy that my parents had insisted when I was a kid that we spoke Arabic at home, because as a kid I kicked and screamed and I was like, ‘Why do we have to be different? Why do we have to speak Arabic at home? Why can’t we speak English like all the other kids?’ But my parents insisted, and I didn’t know any better. Suddenly, I found myself in grad school, I spoke fluent Arabic, and a little bit of Spanish because I started early because we had a substitute teacher in the third grade who infused Spanish into our curriculum. Suddenly I had these tools, and it was really helpful. It was really making my life easier, and I found that I was so far ahead of so many of my peers who hadn’t spent the time acquiring these skills,” enthuses Mohammed.

He helped to develop George Mason University’s programs in the Emirates and South Korea and then moved to Georgetown University, where he continued to see the power of this interdisciplinary learning experience where a language, world area studies, and other disciplines like business, public health, and law were having an impact on society. “These students were leaving our campuses with the toolbox to operate in a sometimes ambiguous environment, and I found that to be just fascinating.”

Now, brought in at the tail end of the Obama administration, he has “a short runway to hopefully do a lot of things.” His operational plan has three “pillars,” the first of which is based around human capital and operations, building capacity on the team, and thinking about operations — how to make things more efficient and more effective. They’ve hired three new program officers and are planning to bring on a few more in the coming months.

The second pillar of the plan is focused on communication, because “I wholeheartedly believe that, generally speaking, we don’t do a great job of articulating the impact of what we do. We don’t tell our story. It’s important that we demonstrate impact. It’s important that we talk about the metrics of our success, but there’s a qualitative piece that I think sometimes we forget about, and what I’d like to do is mix the two together. I’m not going to get away from the quantitative impact, that’s important and we need to be able to measure certain things, but we also need to bring some life to these stories. Where are we falling short? Where are the kids who are falling through the cracks? Who are the kids that are doing really well? I want to hear the story about the kid, from Kansas who had never left an hour’s drive of his home and suddenly finds himself on a scholarship at a place like Ohio State, or Indiana, or Michigan, or Berkeley, and learns Mandarin. The next thing you know, this kid, who’s a finance major, is doing a deal for a bank in Shanghai. I think that’s a great story and we need to talk about that. We need to talk about the story of the young nurse who goes to school and learns another language and ends up in a hospital and is able to treat new immigrants to this country who don’t speak English, but she’s able to provide better patient care because she learned another language at her school. I keep telling my team we’ve got to think about the fact that our classrooms and our neighborhoods and our playgrounds all look different.

“These skills are not a ‘nice-to-have’ — in this town (Washington, DC) a ‘nice-to-have’ is not a good thing. We’ve got to be seen as an essential, and part of that is our storytelling and reframing. For many of us in this room who have drunk the Kool-Aid and believe in what we do, sometimes we take it for granted. I take it for granted all the time, like of course everybody should learn a couple foreign languages, but not everybody on Main Street gets it. Not every college student who’s 18 years old and maybe working a job or two, maybe at the Gap or maybe at the dining hall on campus, is taking out student loans and is maybe the first in the family to go to college, not every student is going to get there and stand in front of the registrar and say, ‘You know what, yeah, I’m going to spend twelve to 16 credit hours on a world language.’ Sometimes the benefit is not entirely clear to our students, and everybody in this room has to play a role in articulating why it’s important.”

Mohammed thinks it’s important to reiterate the President’s line about 95% of the world’s consumers being outside of U.S. borders and 75% of the people in the world not speaking English, despite it being the lingua franca of the business world. He points out that one in five American jobs are tied to international trade and that number is expected to grow, and depending on the state one lives in, that number is likely to be higher. So these skills are not a “nice-to-have,” they’re an essential, and “we’ve got to do a better job of telling that story.”

The last pillar in the roadmap is what he loosely calls innovation, “thinking a little more creatively around leveraging platforms that are out there. Leveraging investments that we’ve currently made, leveraging historical investments, looking for synergies within the ecosystem, and then also looking forward.” With talk of reauthorization of the Higher Education Act, Mohammed’s department is taking time to think a little bit more about the future of their program, talking to grantees, talking to partners and colleagues, and talking to the business community to get a sense of what skills that a person needs and how we need to prepare students for the workforce of tomorrow.

Mohammed and his team have their work cut out over the next few months. Follow their progress on Twitter at @goglobaled, where they also want to hear and share your stories.

This article is based upon a speech given by Mohamed Abdel-Kader to delegates at the JNCL–NCLIS Languages Advocacy Day on May 7, 2015, in Washington, DC.