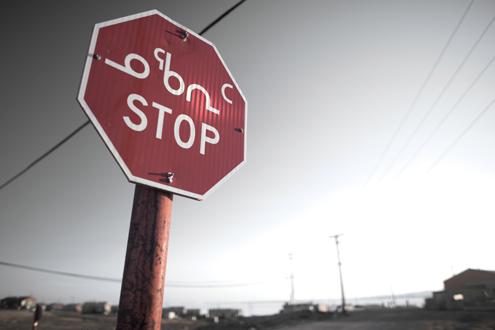 The Nunavut Official Languages Act came into force this month — a milestone in the history of this young and vast Canadian territory. The new act maintains the rights and privileges of English and French, while the Inuit language will be elevated to equal status. This level of statutory protection for an aboriginal language is unprecedented in Canada. The Inuit languages Inuktitut and Inuinnaqtun are the native tongues of 83% of the population of the territory.
“I am proud that Inuit in Nunavut now have a clear statement of their inherent right to the use of the Inuit language in full equality with English and French,” said James Arreak, Minister of Languages. “The act further recognizes the important cultural contributions of Anglophones and Francophones in our territory and affirms our commitment to deliver programs and services to the public in all three official languages.”
All three official languages will enjoy equality of status and equal rights and privileges as to their use in territorial institutions — namely in the Legislative Assembly, the courts, and the departments of the government of Nunavut — and public agencies. The legislation that OLA replaced, the Northwest Territories Official Languages Act, made the official language of the Inuit second only to French and English in terms of status. The same lesser position was assigned to six other aboriginal languages. It took five years to pass the act as law. Now, the residents of Nunavut may access various services of the government in Inuktitut and Inuinnaqtun.

The comprehensive Uqausivut Comprehensive Plan, tabled during the sitting of the Legislative Assembly last fall, will help departments and public agencies to improve their delivery of services to the public in all official languages. To support departments and public agencies in meeting their legal obligations, the Department of Culture and Heritage will centrally administer territorial and federal language funds established for that purpose, which which comprise of CAN$5 million for Inuit language initiatives and approximately $1.45 million for French language initiatives.

Vicki Contreras wakes up early every morning in Xiloxochico (pronounced Shee-lo-show-sheek-o) to catch the bus to her job at the Hotel Taselotzin in the neighboring town of Cuetzalan, three hours north of Puebla, Mexico. As the sun rises over the Sierra Norte hills, the hotel’s kitchen warms and is filled with delicious smells as Vicki prepares the morning’s fresh coffee, hot chocolate with cinnamon, huevos revueltos, and frijoles that await the guests.

Vicki belongs to a women’s cooperative that manages the Hotel Taselotzin, an eco-lodge, with 44 other women from five Nahua communities. Over a decade ago, the women invested their own money and labor to construct this beautiful hotel. In exchange for their work at the hotel, they benefit from the profits of the business to support their families with food, clothing, and soap. The women take what they need and share the rest: the Nahua society maintains a strong sense of cooperation.
The Hotel Taselotzin overwhelmingly welcomes Mexican national tourists seeking an escape from the bustle of the cities, as well as many international visitors who enjoy the packed market days on Cuetzalan’s cobblestone streets and the nearby caves and Totonac ruins. The lush gardens on the hotel grounds grow herbs for the restaurant’s menu, rose petals for the handmade soap, and orange blossoms that Vicki handpicks for tea. Staff are careful to recycle goods and separate organic and inorganic waste to lessen their impact on the land. Caring for the earth is an important Nahua custom.

Each year, Global Citizens Network (GCN), a Minneapolis-based nonprofit organization, sends volunteers to partner with other villagers from Vicki’s community of Xiloxochico on locally initiated, grassroots development projects. This self-sufficient community works together to provide a practical service that makes it easier for people to stay in their village — and preserve their Nahua way of life, including the rich Nahuatl language.

Nahuatl is the language of the Aztecs, Toltcec, and others. (The words avocado, tomato, chili, coyote, and chocolate have Nahuatl roots.) Nahuatl comes from the root Nahua, meaning “a dance done with the hands entwined, a concordance, to move in cadence,” and is also known as the turquoise smoke, a harmonious speech that is pleasing to the ear. At one time, Nahuatl was spoken all over present-day Mexico, and it is still one of the most important indigenous languages in the country, with 1.5 million speakers — making it the most widely spoken indigenous language in Mexico. An estimated 190,000 people speak only Nahuatl.

In 2012, Xiloxochico requested that GCN partner directly with the parent and teacher committee of a bilingual Spanish-Nahuatl school for youth. The primary school, Chayojkila Xiloxochico, was founded in 1999 and historically used in-kind space in various locations. The school was founded by a group of dedicated parents and teachers who sought support from CONAFE, Mexico’s National Council on Educational Development. Last year, they successfully sought and received a land grant to build a permanent space for their school. GCN has since sent two teams to work side by side with villagers, directed by local leadership, to enhance the school by excavating land, painting, and installing windows. Future teams of volunteers will build additional classrooms, bathrooms, and a creative playground space.

“It was a day of magic moments. The GCN team arrived at the school site to see members of the community already there. Work was being done, mostly painting, and families were coming little by little to share in celebration of the week’s accomplishments. Professor Valentine spoke on behalf of the community, thanking us for the support. He expressed his pride in the Nahua people and the school they are working so hard to build so that they can maintain the Nahuatl language and culture among their children.”

No sooner did GCN’s team return home to the U.S. than Professor Valentine Contreras Coyota (Vicki’s brother) sent this message of gratitude and solidarity:

“At Nicolás Bravo Elementary School, parents of the students gathered in one of the classrooms to share their perspectives regarding to the visit of the Global Citizens Network team from Minnesota in the U.S. The visit was an enjoyable experience for the parents to witness the organization’s good intensions to support the project, specifically the school bathroom project that was done during this visit.

“I wanted to share with you that the parents are in agreement, we would like to welcome other GCN groups. The parents expressed that all who visit are always welcome. Our school community and association will always welcome GCN visits so we may continue to share experiences, impart our indigenous culture, and share our customs. The students are excited about another visit.”

GCN is equally enthusiastic about a return visit and looks forward to many future volunteer teams participating in this partnership. The organization fosters the belief that culture and language preservation is possible with a global commitment to supporting indigenous communities.

Laura Nuñez is academic partnerships manager at Global Citizens Network. To learn more about how you and/or your students can get involved, visit www.globalcitizens.org