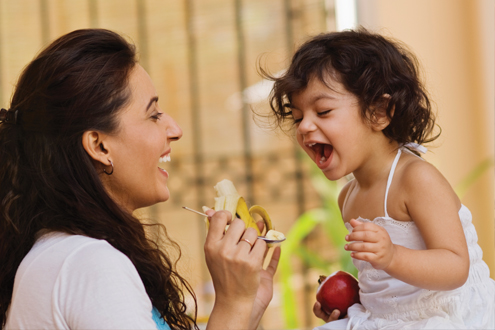 Fifty years of research have revealed the sad truth that the children of lower-income, less-educated parents typically enter school with poorer language skills than their more privileged counterparts. By some measures, five-year-old children of lower socioeconomic status score more than two years behind on standardized language development tests by the time they enter school.

Stanford researchers have now found that these socioeconomic status (SES) differences begin to emerge much earlier in life: by 18 months of age, toddlers from disadvantaged families are already several months behind more advantaged children in language proficiency.

The study, published in Developmental Science, is the first to identify an “achievement gap” in language-processing skill at such a young age and could inform strategies to intervene and bring children up to speed.

In an experiment designed to investigate children’s vocabulary and language-processing speed, Anne Fernald, a Stanford associate professor of psychology, enrolled 20 children, 18 months old, who lived near the Stanford campus, and tested how quickly and accurately they identified objects based on simple verbal cues. Follow-up tests six months later measured how these skills had developed.

Research conducted in university laboratories commonly relies on a “convenience sample” of local participants who are usually affluent and highly educated. Since children in these higher SES families have many other advantages as well, the results of such research do not represent the majority of children living in less-privileged circumstances in the U.S.

To include a broader range of children in her research, Fernald took her lab on the road. She duplicated the experimental setup of her Stanford-based lab in a 30-feet-long RV and drove to a city a few hours north of campus, where the median household income and education levels are much lower on average than in the Bay Area.

The researchers recruited another 28 toddlers, aged roughly 18 months, from this lower-SES population and performed the same experiments as they had on campus. Then they retested the children six months later when they turned two years old to see how they had progressed.

The beginning of the language gap
Fernald has devised an elegant test for measuring toddlers’ language-processing speed. Sitting on their mothers’ laps, the kids are shown two images; for example, a dog and a ball. A recorded voice then instructs the toddlers to “look at the ball” while a high-definition video camera records the children’s reactions.

Trained “coders” then review the videos frame by frame and note the exact moment that a child’s gaze begins to shift toward the target object. In this way, toddlers’ efficiency in language understanding can be measured with millisecond-level precision.

At 18 months, toddlers in the higher-SES group could identify the correct object in about 750 milliseconds, while the lower-SES toddlers were 200 milliseconds slower to respond.

“A 200-millisecond difference in response time at 18 months may not sound like much, but it’s huge in terms of mental processing speed,” Fernald said.

Both groups of children got faster with age, but at 24 months the lower-SES children just barely reached the level of processing efficiency that the higher-SES children had achieved at 18 months.

The researchers also asked parents to report on their children’s vocabularies at these age points. Between 18 and 24 months, the higher-SES children added more than 260 new words to their vocabularies, while the lower-SES children learned 30% fewer new words over this period.

“By two years of age, these disparities are equivalent to a six-month gap between infants from rich and poor families in both language-processing skills and vocabulary knowledge,” Fernald said. “What we’re seeing here is the beginning of a developmental cascade, a growing disparity between kids that has enormous implications for their later educational success and career opportunities.”

Kids learn from context
Fernald suggests that slower processing rates are partly responsible for slower vocabulary growth in the early years. Toddlers learn new vocabulary from context, and the faster a child can get at the words she knows, the more able she is to attend to the next word in the sentence and to learn any new words that follow.

“If you say ‘the dog is on the sofa,’ and the baby at 18 months is slow to process ‘dog,’ they’re not open for business when ‘sofa’ comes along,” Fernald said. “If they’re quick on ‘dog’ and understand that the dog is on something, but don’t know what it is, the faster kids are more likely to learn ‘sofa’ from the context.”

This link between early processing speed and language learning is supported by other results from Fernald’s research group. In studies following both English- and Spanish-learning toddlers over several years, they found that children who are faster at recognizing familiar words at 18 months have larger vocabularies at age two years and score higher on standardized tests of language and cognition in kindergarten and elementary school.

Seeking a solution
Where do such early differences among children come from? One critical factor is that parents differ in the amount of language stimulation they provide to their infants. Several studies show that parents who talk more with their children in an engaging and supportive way have kids who are more likely to develop their full intellectual potential than kids who hear very little child-directed speech.

“For lots of reasons, there is generally less supportive talk to children in families living in poverty, which could partially explain the SES differences we found in children’s early processing skill and vocabulary learning,” Fernald said.

In previous research on caregivers’ speech to Spanish-learning children, Fernald’s group found big differences in levels of parental engagement even within a disadvantaged group of families. Those lower-SES kids who heard more child-directed talk got faster in processing and learned language more rapidly.

“It’s clear that SES is not destiny,” Fernald said. “The good news is that regardless of economic circumstances, parents who use more and richer language with their infants can help their children to learn more quickly.”