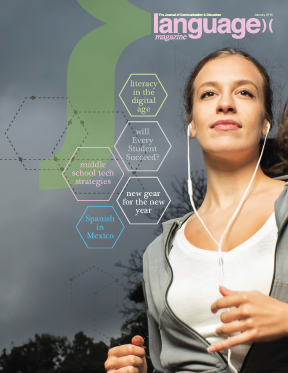 TIME Magazine chose German chancellor, Angela Merkel, as its 2015 person of the year because of her defense of humanitarian principles in welcoming a million Syrian refugees despite opposition from her political rivals in Germany and her partners within the European Union, as well as criticism from further afield, including GOP presidential hopeful Donald Trump, who has called the policy “insane.” Merkel’s inclusive approach is reflected by her administration’s adaptive attitude to language.

According to the German Federal Depart­ment for Migration and Refugees, Syrians filed nearly 104,000 asylum applications for 2015 by the end of October. Of those, more than 90% are likely to be accepted. So, last year, Germany probably accepted more refugees just from Syria than the U.S.’s refugee total, in addition to which Germany houses hundreds of thousands of asylum-seekers—more than 700,000 last year.

The German government has earmarked over $6 billion to help integrate these refugees, including a considerable investment in German classes (see “Another 8,500 German Teachers for Refugees,” page 16), while accepting that they speak another language so it is only right that they should be afforded the dignity of being spoken to in that language—Merkel chose to have her New Year’s Eve speech provided with Arabic subtitles for the first time (http://arabic.zdf.de/ar).

Germany hasn’t always been as tolerant of migration and multilingualism, as evidenced by its long-standing guest worker program that marginalized Turkish migrants, and by the continued calls for German monolingualism—just last month, the CSU party in Bavaria was forced to backtrack after drafting a proposal suggesting that migrants in Germany need to speak German both in public and at home. All of this adds to Merkel’s exceptionalism, which may be rooted in her spending 35 years growing up under the restrictive regime of East Germany.

Despite considerable opposition to her liberal policies, most urban Germans seem to embrace multiculturalism. This is supported by the popularity among ethnic Germans of Kiezdeutsch, a dialect, which according to Heike Wiese, a linguist at Potsdam University and author on the subject, should not be viewed as poor German, spoken by immigrants but as a multiethnolect, influenced, like other German dialects, by its cultural and linguistic environment that coexists alongside standard German.

Kiezdeutsch is the same whether the speaker’s parents communicate in Turkish, German, Arabic, or another language, and has been compared to African American Vernacular English (AAVE) or Black English. The two dialects emerged in similar ways, and, in the same way that American youth of all heritages has adopted aspects of AAVE to distance itself from the political establishment, German youth is embracing multiculturalism through the adoption of Kiezdeutsch.

During her New Year speech, Merkel stated that the immigration of “new citizens” who stay permanently is a huge chance for Germany and urged listeners not to “follow the others who have coldness and hate in their hearts” because they believe that “being German belongs to them alone.” Germany belongs to everyone—she concluded that despite “costing huge amounts of money and willpower,” the influx is an “economic and societal benefit.”

Languages reflect the development and integration of our societies—some will be lost, most will be “corrupted,” but they are dynamic and will adapt to the new realities of our multicultural existence.

Our willingness to use minority languages, our acceptance of alternative languages, and our eagerness to help migrants acquire new languages will be key to peaceful coexistence and successful integration during this migratory era.

Will Every Student Succeed? America’s new federal education bill has grand aspirations, but will it live up to them?

Educate to Make America Great Douglas Chrystall argues that the prison industrial complex doesn’t want our non-native speakers to learn English, which is why we must help them