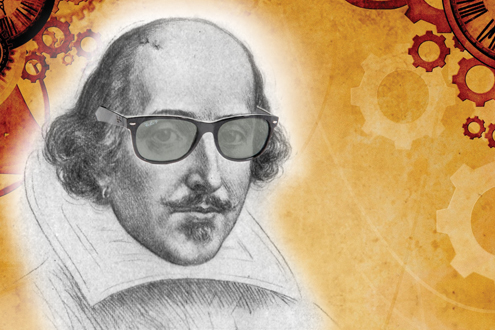 It’s About Time by Richard Lederer

William Shakespeare spoke of people who “run before the clock,” as if the hands of the clock would sweep them away if they did not hustle their bustles. In the English-speaking world so many of us seem to be working harder and taking fewer and shorter vacations. The Oxford English Corpus list of word frequencies confirms that obsession with time and productivity by revealing that time is the most frequently used noun in our language. Year is ranked third, day fifth, work sixteenth, and week seventeenth.

Time is also a perfect anagram, a word whose letters can be juggled so that each new word begins with a different letter from the original word: “Now is the time to emit information about an item that may help you a mite.”

Have you ever noted how ambiguous are statements that involve time?:

• “Let’s push up [or back] that appointment by two days.” Does that mean that the appointment will now be two days earlier or later?

• “I’ll see you next Wednesday.” Is that the Wednesday coming up, or the one after that?

• “Our biannual meeting is very important.” Does that meeting take place twice a year or every other year?

• “The boss will see you momentarily.” Will the boss see you in a moment or for a moment?

• “Since 1988, the company has been at the forefront of technological creativity.” Does that innovativeness include 1988?
• “The train arrives at 12 A.M.” Is that noon or midnight?

It’s amazing that we English speakers ever get any place on time.

Richard Lederer M.A.T. English and Education, Ph.D. Linguistics, is the author of more than 40 books on language, history, and humor. His new book A Tribute to Teachers, is available now at his web site — www.verbivore.com.
Write him at [email protected].