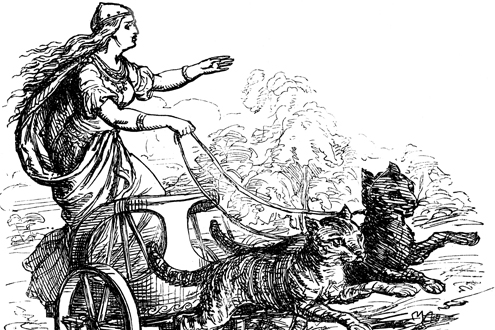 Days
Wednesday is spelled so peculiarly because it descends from an Old English word that meant “Woden’s day,” Woden being the great storm god in Norse mythology who corresponds to the Roman deity Mercury. Woden was the father of Tyr, who bequeaths us the name Tuesday.

From Thor, the strongest and bravest of the Norse gods and counterpart to the Roman Jupiter, we get Thursday, and from Woden’s wife Frigg, the goddess of marriage, we receive Friday.

Months
September, with its derivation from the Latin septem, looks as if it should be the seventh month of the year. And October (octo), November (novem), and December (decem) appear in their structure to be the eighth, ninth, and tenth months. And they were, when the Roman lunar calendar started the year in March at harvest time.

But all that changed in 46 B.C., when January became the first month of the new Julian calendar, making September, October, November, and December the ninth, tenth, eleventh, and twelfth months of the year.
Several other numbers embedded in our words are deceiving:

• Unique reflects the Latin unus, “one,” but many people use unique to mean not “one of a kind,” but simply “unusual,” as in “You have a very unique opportunity to support a worthy cause.”

• Siesta, from the Latin compound sexta hora, literally means “the sixth hour after sunrise, i.e. “noon”, but the siesta now refers to a rest period that can occur at any time of day.

• Decimate once described the nasty habit of the Romans of maiming or killing one out of every ten captives or mutineers. Now decimate means “to destroy,” with no connection to the number ten.

• The first meaning of quarantine, from the Italian quarantina, was a period of forty days during which a widow had the right to continue living in her deceased husband’s house, especially if the residence was to be seized for debt. Soon the word took on a related meaning-the forty days in which a ship suspected of carrying disease had to remain in isolation. And soon after that, quarantine broadened to signify any period of sequestering, and the reference to “forty” has vanished.

Richard Lederer M.A.T. English and Education, Ph.D. Linguistics, is the author of more than 40 books on language, history, and humor. This excerpt is from his new book Amazing Words,a career-capping anthology of bedazzling, beguiling, and bewitching words available now at his web site — www.verbivore.com. Write him at [email protected]