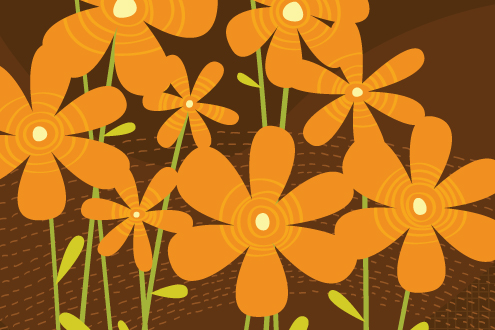 I am button-burstingly proud of a book of mine titled Word Wizard, because it is an anthology of my best and most popular work and thus represents the arc of my writing career. The Greek forebear is anthologia: anthos, “flower” + lego, “gather” = “a gathering or collection of flowers.” I am so pleased to have grown enough literary blossoms that I could arrange them into a bouquet.

Our English language is made more exquisite and colorful by an anthology of flowery words:

• The English used to call the yellow, shaggy weed a “lion’s tooth” because the jagged, pointed leaves resemble the lion’s snarly grin. During the early fourteenth century, the lion’s-tooth plant took on a French flavor and became the dent-de-lion, “tooth-of-the-lion.” Then it acquired an English accent: dandelion.

• In Greek mythology, the blessed spent their afterlife in the Elysian fields, which were carpeted with a flower the Greeks named asphodelos. Over time, the word acquired an initial d and eventually became daffodil.

That’s fortunate, because we now have the best of all flower palindromes: lid off a daffodil.

• Also from ancient mythology we inherit narcissus, a handsome and usually white or yellow flower. The name echoes the myth of the handsome Narcissus and the doomed Echo, which you can read about in the entry for ECHO, below.

• The unusual double bulbs of the orchid bear an uncanny resemblance to male gonads. That’s why the beautiful and expensive flower receives its name from the Greek word for “testicle,” orkhis. More than two thousand years ago, Pliny the Elder observed, “Mirabilis est orkhis herba, sive serapias, gemina radice, testiculis simili.” Even if you don’t know Latin, I’m confident that you can deduce the meaning of the first and last parts of that statement. Pliny believed that just holding an orchid in one’s hand would expand sexual desire.

• Of the various plants associated with the Christmas season, the poinsettia, possesses the most intriguing history etymologically. A Mexican legend tells of a penniless boy who presented to the Christ child a beautiful plant with scarlet leaves that resembled the Star of Bethlehem. The Mexicans named the plant Flor de la Noche Buena (“Flower of the Holy Night”). Dr. Joel Roberts Poinsett, the first U.S. minister to Mexico, discovered the Christmas flower there in 1828 and brought it to this country, where it was named in his honor in 1836. The flaming poinsettia has become one of the most popular of Christmas plants — and one of the most misspelled and mispronounced words (pointsettia, pointsetta, poinsetta) in the English language.

• When we call someone precocious, we are complimenting a talent of theirs that they evince at an early age. Precocious literally means “cooked too early,” from the Latin prae-, “before,” and coquere, “to cook.” The word was first used in English to describe plants that blossomed or produced fruit prematurely.

• The tulip’s cup-shaped “mouth” may remind you of “two lips,” but that is not how the flower got its name. The Dutch borrowed tulip from the French (tulipan), who purloined it from the Turks (tulbend), who noted that the shape of the flower reminded them of a turban.

Richard Lederer M.A.T. English and Education, Ph.D. Linguistics, is the author of more than 40 books on language, history, and humor. His latest book, Amazing Words, a career-capping anthology of bedazzling, beguiling, and bewitching words, is available now at his web site — www.verbivore.com.