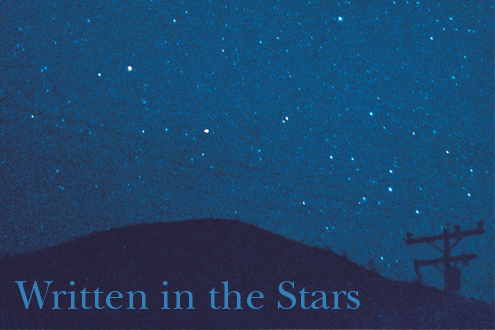 Richard Lederer looks to the heavens for explanation

In William Shakespeare’s Julius Caesar, Cassius warns Brutus that fate lies “not in our stars, but in ourselves.” Nevertheless, for centuries, people have believed that the stars and their heavenly positions govern events here on Earth. In the ghostly opening scene of Hamlet, Horatio speaks of “stars with trains of fire and dews of blood, / Disasters in the sun…”

If a conjunction of the heavenly bodies is not propitious, disaster will strike. Cobbled from the Latin dis, “bad, against,” and astrum, “star,” disaster literally means “against the stars, ill-starred, star-crossed.”

Astrum is a prolific root that gives us aster (a star-shaped flower), astrology (“star study”), astronomer (“star arranger”), asteroid (“star form”), and astronaut (“star sailor”). Then there’s the asterisk, the symbol that looks like a “little star.” You may wish to dispute my celestial etymologies, but I think you’d be an asterisk it:

* lunatic. Luna, the Roman goddess of the moon, is memorialized in lunatic. That’s because when the moon is full, it is said to render us daft — moonstruck or loony. Some studies show that more crimes are committed during the full moon than any other lunar phase. Is that because there is more light to perpetrate transgressions, or because our long-ago ancestors were right all along?

* honeymoon. We moon around about somebody, we moonlight with a second job that we perform at night, we take a long trip once in a blue moon, and newlyweds go on honeymoons. The ancients customarily drank mead, or honey wine, for the first thirty days of marriage. Honeymoon joins together honey, used figuratively to mean “love,” and moon as a synonym for “month.” The idea is that the honeymoon is the sweetest month of a marriage, which, like the moon itself, will wane.

* eccentric. Derived from Greek ekkentros, “out of the center,” from ek, “out of” + kentron, “center,” eccentric first appeared in English in 1551 as an astronomical term describing “a circle in which a heavenly body. deviates from its center.” Modern-day astronomers still use eccentric in that way.

* dog days. The ancients believed that the influence of the stars generated the dog days, summer periods of triple-h weather — hazy, hot, and humid. In the days of the Romans, the six or eight hottest weeks of the summer, roughly July through the first half of August, were known colloquially as caniculares dies, or “days of the dog.” According to Roman lore, the dog star Sirius rose with and added its heat to the sun, making a hot time of the year even hotter.