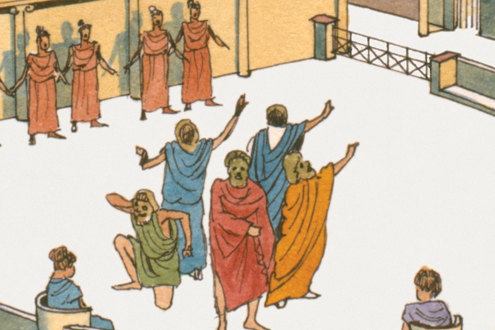 Richard Lederer takes us to the home of rhetoric

I love how zeugma sounds and looks. Zeugma, from a Greek word meaning “yoke,” is also one of my favorite figures of rhetoric. Zeugma features the omission of a verb, creating a striking yoking of two nouns:

Or stain her Honor, or her new Brocade . . .
Or lose her Heart, or necklace at a Ball.
— Alexander Pope

When I am speaking on behalf a large-hearted organization, I sometimes declare zeugmatically, “ABC Charity validates your parking and your humanity.” Zeugma is one of dozens of figures of speech and rhetoric in the bestiary collected by the ancient Greeks. Among other specimens:

* alliteration. The repetition of initial consonant sounds. Dollars to doughnuts, our English language contains a treasure trove and kit and caboodle of tried-and-true, bright-eyed-and-bushy-tailed, bread-and-butter, bigger-and-better, cream-of-the-crop, fit-as-a-fiddle, hale-and-hearty, picture-perfect, shipshape alliterative expressions, all of them good as gold and worth a pretty penny.

* enallage. A rhetorically effective mistake in grammar, as in “We was robbed!” — Jimmy Jacobs; “If it ain’t broke, don’t fix it.”

* isocolon. Parallelism of grammatical forms, as in “The bigger they are, the harder they fall” and “…government of the people, by the people, for the people…” — Abraham Lincoln

* litotes. A deliberate understatement that helps make a point, as in “Last week I saw a woman flayed, and you will hardly believe how much it altered her appearance.” — Jonathan Swift

* paraprosdokian. Derived from two Greek roots that mean “an unexpected outcome,” this figure of speech is characterized by a surprising left-hand turn at the end of a statement that produces a humorous or dramatic effect, as in “I’ve had a perfectly wonderful evening, but this wasn’t it.” — Groucho Marx; “When I die, I want to die like my grandfather did — peacefully in his sleep, not screaming like all the passengers in the car he was driving.” — Bob Monkhouse

* simile. A comparison between two essentially different objects or ideas expressly indicated by words such as like or as, as in “My love is like a red, red rose.” — Robert Burns

One Judge Martin J. Sheehan of Kenton Circuit Court, Kentucky, rejoiced similitudinously in the settlement of a case that had been scheduled to go to trial earlier:

“And such news of an amicable settlement having made this court happier than a tick on a fat dog because it is otherwise busier than a one-legged cat in a sand box and, quite frankly, would have rather jumped naked off of a twelve-foot step ladder and into a five-gallon bucket of porcupines than have presided over a two-week trial of the herein dispute, a trial which, no doubt, would have made the jury more confused than a hungry baby in a topless bar and made the parties and their attorneys madder than mosquitoes in a mannequin factory.

“It is therefore ordered and adjudicated by the court that the jury trial scheduled herein for July 13, 2011, is hereby canceled.”

* synecdoche. The substitution of a part for the whole, as in “Dad, why don’t Mom and you watch the tube tonight so that I can borrow the wheels?”

Richard Lederer, MAT English and education, PhD linguistics, is the author of more than 40 books on language, history, and humor. This excerpt is from his latest book, Amazing Words, a career-capping anthology of bedazzling, beguiling, and bewitching words, available now at his website — www.verbivore.com.