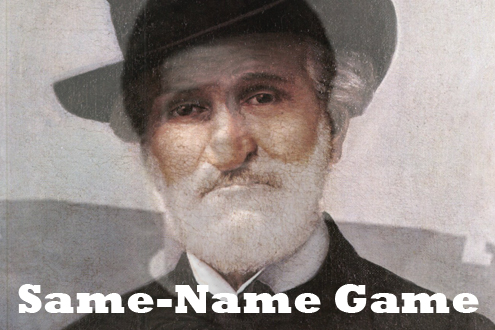 We celebrate the bicentennial of the birth of the man who, along with Richard Wagner, is considered the preeminent composer of 19th-century opera. His name is Giuseppe Verdi, and he entered the earthly stage in Le Roncole, Parma, on October 10, 1813. Among the 25 operas Giuseppe Verdi composed ring out the immensely popular and enduring Rigoletto, Il Trovatore, La Traviata, and Aida.

Why, you may be asking by now, is a language columnist writing about a great composer? Stay with me, gentle reader, and you’ll soon find out.

Now the language limelight falls upon a category that will appeal especially to wordplay lovers. These groupings embrace fictional characters, pseudonyms, homophonic names, and foreign-language equivalents.

But the most pyrotechnic same-name pairing of all — and the reason why I opened this column as I did — is opera giant Giuseppe Verdi and the translation of his name from Italian into English: Pittsburgh Steelers lineman (Mean) Joe Green.