An Uncanny Sense of Entitlement 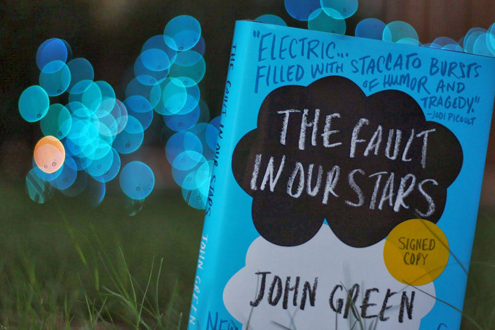 William Shakespeare was a busy and prolific writer who, in 25 years, turned out 37 long plays and co-authored several others, yet he still found time to provide titles for their books to generations of authors who return again and again to the well of his felicitous phrasing.

Take John Green’s immensely popular teen novel The Fault in Our Stars, which has recently transmogrified into an immensely profitable movie. The title echoes Cassius’s speech in Julius Caesar to his co-conspirator: “The fault, dear Brutus, is not in our stars,/ But in ourselves, that we are underlings.”

From that same play have been lifted the titles of Frederick Forsythe’s The Dogs of War, J. M. Barrie’s Dear Brutus, John Gunther’s Taken at the Flood, Barry Sadler’s Cry Havoc, R. Lance Hill’s The Evil That Men Do, Holworthy Hall and Robert Middlemass’s The Valiant, and David Halberstam’s Noblest Roman.

Macbeth is another favorite play in the high school classroom. In the last act, Macbeth expresses his darkening vision of life: “It is a tale/Told by an idiot, full of sound and fury,/Signifying nothing.” Centuries later, William Faulkner purloined a phrase from that speech for his novel The Sound and the Fury, in which the first section is indeed told by an idiot, Benjy Compson.

Earlier in Macbeth, one of the three witches chants, “By the pricking of my thumbs,/Something wicked this way comes.” Agatha Christie plucked the first line and Ray Bradbury the second as titles of their bestsellers.

Other steals from just the one play Macbeth include Robert Frost’s “Out, Out — ,” Rose Macaulay’s Told by an Idiot, Ellis Middleton’s Vaulting Ambition, Adrienne Rich’s Of Woman Born, Ngaio Marsh’s Light Thickens, Anne Sexton’s All My Pretty Ones, Alistair MacLean’s The Way to Dusty Death, Edward G. Robinson’s All Our Yesterdays, Philip Barry’s Tomorrow and Tomorrow, Malcolm Evans’s Signifying Nothing, and John Steinbeck’s The Moon is Down.

From two other high school favorites — Hamlet and Romeo and Juliet — issue A. G. MacDonnell’s How Like an Angel, Rex Stout’s How Like a God, Joyce Martins’s Rosemary for Remembrance, Robert B. Parker’s Perchance to Dream, Arthur Schnitzler’s Undiscovered Country, Ernest Hebert’s A Little More Than Kin, Edith Wharton’s The Glimpses of the Moon, Philip K. Dick’s Time Out of Joint, Ogden Nash’s The Primrose Path, Richard Yates’s A Special Providence, Frederic Manning’s Her Privates We, Tom Stoppard’s Rosencrantz and Guildenstern Are Dead, Louis Auchincloss’s The Indifferent Children, Maxwell Anderson’s Both Your Houses, Eric Knight’s This Above All, Dorothy Parker’s Not So Deep as a Well, Ford Madox Ford’s It Was the Nightingale, Frederick Reynolds’s Fortune’s Fool, and Henry Wade’s No Friendly Drop.

Add to these Aldous Huxley’s Brave New World (The Tempest); W. Somerset Maugham’s Cakes and Ale (Twelfth Night), John Steinbeck’s The Winter of Our Discontent (Richard III), and dozens of other bardic titles — and it becomes evident that William Shakespeare was one of the most generous souls who ever set quill to parchment. Although he himself was never granted a title, he freely granted titles to others.