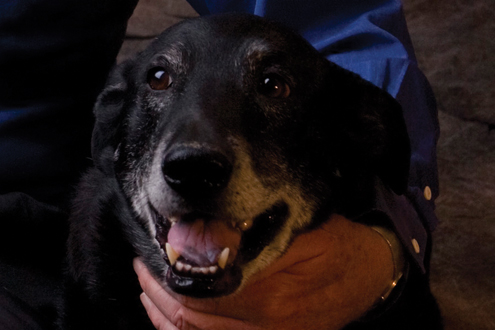 Recently, Simone and I lost our dear friend, Bart. He was our gentle, companionable black lab mix, and his mighty heart beat for more than 16 years. Despite rickety back legs and a battalion of tumors, he greeted each day with bright eyes, waggy tail, and unconditional trust.

Bart showed Simone and me our finest selves. He loved us more than he loved himself. I think of our fallen boy when I read what the romantic poet Lord Byron wrote on the tomb of his Newfoundland: “Near this spot are deposited the remains of one who possessed Beauty without Vanity, Strength without Insolence, Courage without Ferocity, and all the Virtues of Man, without his Vices. This praise, which would be unmeaning Flattery if inscribed over human ashes, is but a just tribute to the Memory of Boatswain, a Dog.”

It’s sad, then, how dogs, those most loyal and companionable of creatures, are treated so shabbily in our English language. It’s easy to think of common words and expressions that are negative about dogs — cur, hangdog, underdog, dog tired, a dog’s life, you dirty dog, son of a bitch, sick as a dog, in the doghouse, you’re dogging it, going to the dogs, you’re dog meat — on and on it goes. But why don’t we say cute as a dog, amiable as a dog, loyal as a dog, loving as a dog? How many positive canine phrases leap to mind? Not many.

Bart’s irreplaceable loss to our family inspires me to share with you, dear reader, three stories of unconditional canine loyalty:

* In Homer’s Odyssey, Odysseus’s dog Argos is the only one who recognized the Greek hero when, after two decades of struggles to return to Ithaca, he came home disguised as a beggar. In his absence, rapacious suitors took over his house in hopes of marrying Odysseus’s wife, Penelope.

When he saw Argos, lying neglected and lice-infested on a pile of cow dung, Odysseus shed a tear but made sure that no one noticed. Argos lifted his ears, wagged his tail and “passed into the darkness of death, now that he had seen his master once more after 20 years.”

* On the grave behind an iron fence in the town of Beddgelert, North Wales, stands marker that recounts the legend of Gelert, a hound owned by the 13th-century prince Llewellyn. One day Gelert disappeared mysteriously as his master rode out to the hunt. When the prince returned, his infant son was nowhere to be found. The child’s crib was overturned and bloody, and Gelert’s fangs were dripping with blood.

Convinced that the dog had savaged the baby, Prince Llewellyn drew his sword and plunged it into the dog. Gelert’s dying cry awoke the sleeping child, who was concealed under the bedding. Hidden under the bed was the body of an enormous wolf, with its throat torn out. Overcome with remorse, Llewellyn buried the dog with great ceremony. But the prince was ever after haunted by the dying yelp, and he never smiled again.

* Hachiko, an Akito, was brought to Tokyo in 1924 by Hidesamuro Ueno, a college professor. Each day, when Ueno left for work, Hachiko would stand by the door to watch him go. When the professor came home at 4 p.m., Hachiko would go to the Shibuya Station to meet him.

After a year, Professor Ueno died of a stroke while at the university. Not realizing that his master was forever gone, Hachiko returned to the train station every single day for ten years (1925-1935) to search for the professor’s face among the people getting off. Today, Shibuya Station is graced by a bronze statue of Hachiko, who still waits for his best friend to come home.

Richard Lederer (pictured with Bart), MAT English and education, PhD linguistics, is the author of more than 40 books on language, history, and humor. His newest book, Amazing Words, is a career-capping anthology of bedazzling, beguiling, and bewitching words available now at his website www.verbivore.com.