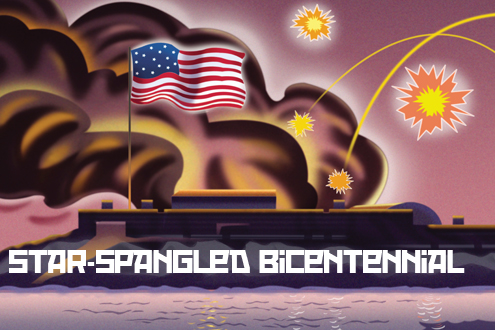 Two hundred years ago, the words to what has become our national anthem were first set on the back of a letter. On Sept. 14, 1814, a 35-year-old Washington lawyer composed a succession of rhyming questions about the precarious fate of his young nation, just 27 years old and under hard attack.

When the United States declared war on Britain on June 18, 1812, the War of 1812, also known the Second Revolutionary War, began. Things were going badly for the American side. In 1814, the British captured Washington D.C. and burned the White House, the Capitol, the Library of Congress, and the Treasury, State, and War Department buildings, as well as other civic structures. They marched south to Maryland, taking hostages as they went. These hostages, including one Dr. William Beanes, were held on British ships offshore.

Attorney Francis Scott Key was charged with bringing about the release of his friend, Dr. Beanes. His negotiations were successful, but his timing was unfortunate. He was aboard a British ship when battle plans were drawn up. The captain informed Key that Beanes and he would not be allowed to go ashore until the battle was over. They would be kept under guard on their own ship for the duration.

Everyone knew that taking Baltimore, an important international port of about 50,000 residents, would effectively split the U.S. in half. British troops on the ground tried but were repulsed. After that, it was the British Navy’s turn. Their strategy was to take Fort McHenry at the entrance to Baltimore Harbor. If they did that, Baltimore would be undefended from invasion by sea.

Nineteen British ships rode at anchor in Chesapeake Bay just outside the range of Fort McHenry’s guns. They started firing just before dawn on Sept. 13. Over the next 25 hours, they lobbed more than 1,500 shells and rockets into the fort.

Baltimoreans had expected the battle and had been readying themselves for months. New flags for the fort were among the preparations. Major George Armistead, the commanding officer, wanted “a flag so large that the British [would] have no difficulty seeing it from a distance.” He got his wish. Mary Young Pickersgill, a well-known flag maker in Baltimore, fashioned two flags of wool: a smaller storm flag and a larger garrison flag with a hoist of 30 feet and a fly of 42. The stripes of the greater flag were two feet wide, and the stars were two feet from point to point. Both flags displayed 15 stars and 15 stripes, since Vermont had joined the union in 1791 and Kentucky had separated from Virginia to become a state in 1792.

During the attack on Fort McHenry, four Americans were killed and 24 wounded. Francis Scott Key watched the bombardment from a ship in the Patapsco River. After the battle, he waited anxiously on deck for the sun to rise. He’d seen the storm flag flying the previous night as the sun went down. To his joy, he saw that Armistead had raised the huge garrison flag.

The broad stripes and bright stars were still there, the battle for control of Baltimore was over, and the Americans had won!

As the sun rose on the scene on the morning of September 15, 1814, Key, an amateur poet, poured his emotions into his four-stanza poem. Titled “Defence of Fort M’Henry,” those verses were later renamed “The Star-Spangled Banner.” They were soon set to the tune of a popular British drinking song, “To Anacreon in Heaven.”

Richard Lederer, MAT English and education, PhD linguistics, is the author of more than 40 books on language, history, and humor. This installment is from the new American Trivia Quiz Book: What We All Should Know About Our Great Nation. Signed copies available at www.verbivore.com.