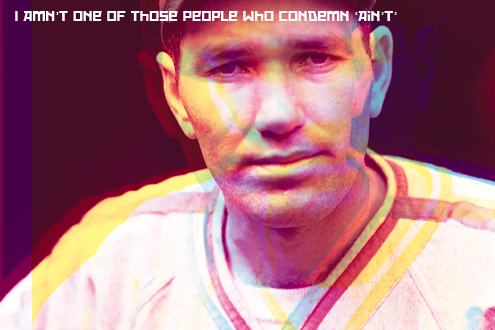 Legendary St. Louis Cardinals pitcher and baseball announcer Dizzy Dean was famous for his idiosyncratic relationship with the English language. Dean peppered commentary with ain’ts and double negatives. When an offended interviewer exclaimed, “Mr. Dean, don’t you know the King’s English?” Dizzy shot back, “Sure I do, and so’s the queen.” On another occasion, when Dean was accused of slaughtering the King’s English, he riposted, “A lot of people who don’t say ain’t ain’t eating.”

Then there’s the story of the farmer who mortgaged his place in order to give his daughter a college education. At her graduation, the daughter confessed, “Dad, I’m sorry, but I have to tell you that I ain’t a virgin anymore.” Father wrung his hands, hung his head, shed rueful tears, and replied, “To think that after all our sacrifices, you still say ain’t!”

A clutch of readers have asked if ain’t is a word. Ain’t is most certainly a word, employed by millions of English speakers and writers around the world. You can’t simply legislate these folks out of existence by insisting that one of their words doesn’t exist.

But ain’t is labeled nonstandard English. Its use, outside of simulating dialect, raises eyebrows and evokes mean sneers in educated company. Say ain’t at your peril; it could lower your social standing. Like the late comedian Rodney Dangerfield, ain’t “don’t get no respect.” That’s a shame.

In days of yore, we English speakers had a solution to this “aren’t I?” problem. Ain’t was a legitimate and respectable contraction for “am not,” but it gradually fell into disrepute as it came to be used indiscriminately with first-, second-, and third-person nouns and pronouns, singular and plural.

As an all-purpose replacement for “am not,” “is not,” and “are not,” ain’t is a useful and logical word that merits our respectful consideration. Perhaps it is time to reach back into our linguistic past and to restore “ain’t I?” to a position of esteem as a contraction of “am I not?”

English employs a caboodle of contractions, especially for negatives.. As the joke goes, my wife was in labor with our first child. Things were going pretty well when suddenly she began shouting, “Can’t! Don’t! Won’t! Shouldn’t! Wouldn’t! Couldn’t!”

“Doctor, what’s wrong with my wife?” I cried.

“It’s perfectly normal,” he assured me. “She’s having contractions.”

It’s strange, then, that no contraction exists for “am not.” Personally, if ain’t has no chance of gaining acceptance, I would lobby for amn’t, a serviceable contraction of “am not” that’s not that hard to say. But until I am appointed Language Czar of this fair land, I amn’t hopeful that my idea will catch on.
One final grammar lesson for today: