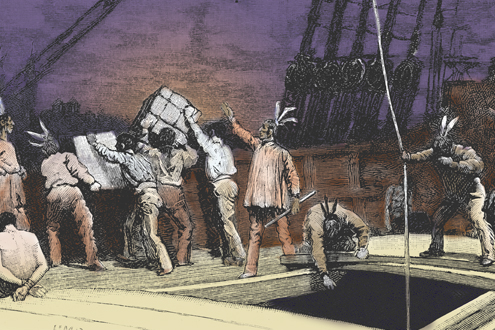 To enhance your Independence Day, witness this fractured chronicle of American history composed entirely of certified, genuine, authentic, unretouched student fabrications. Read carefully, and you will learn a lot.

Christopher Columbus discovered America while cursing about the Atlantic Ocean on the Nina, the Pinta Colada, and the Santa Fe. Columbus knelt, thanked God, and put the American flag in the ground.

Later, Jamestown was discovered by King James the One. The Pilgrims crossed the ocean in hardships. The men wore pants that only came a little ways past their knees, and the girls wore funny bonnets. The winter of 1620 was a hard one for the settlers. Many people died, and many babies were born. Captain John Smith was responsible for all this.

One of the causes of the Revolutionary War was the English put tacks in their tea. When General Burgundy surrendered to Sara’s Toga, the colonists won the war and no longer had to pay for taxis.
America was founded by four fathers. Delegates from the original 13 states formed the Contented Congress. Thomas Jefferson, a Virgin, and Benjamin Franklin were two singers of the Decoration of Independence, which says that all men are cremated equal and are well endowed by their creator.

George Washington led the United States to what it is today, while Ben and Dick Arnold were terrible traitors. Washington crossed the Delaware River, married Martha Custis, and in due time became the Father of Our Country.

The two greatest marshals of the Old West were Wyatt Burp and Wild Bill Hiccup. General George Custer extinguished himself at the Battle of the Little Big Horn.

Abraham Lincoln became America’s greatest Precedent. Lincoln’s mother died in infancy, and he was born in a log cabin which he built with his very own hands. Abraham Lincoln wrote the Gettysburg Address while traveling from Washington to Gettysburg on the back of an envelope.

On the night of April 14, 1865, Lincoln went to the theater and got shot in his seat. The believed assinator was John Wilkes Booth, a supposingly insane actor. This ruined Booth’s career.

The 19th century was a time of a great many thoughts and inventions. People stopped reproducing by hand and started reproducing by machine. The invention of the steamboat by Robert Fulton caused a network of rivers to spring up. Samuel Morse invented a code of telepathy. Eli Whitney invented the spinning gin. Thomas Edison invented the pornograph and the indecent lamp.

The First World War was caused by the assignation of the Arch-Duck by an anahist. World War I made the people so sad that it brought on the Great Depression. Then the New Deal tried to make sure that the stock market will never happen again.

Charles Limburger was the first man to ever cross the Atlantic alone. He wanted to go by regular airlines, but he couldn’t afford to buy a ticket. When he got to Paris, all the French people shouted, “Bonzai!”

World War II happened when Adolph Hitler and the Knotsies tried to conquer Europe. Hitler always liked to call himself Der Furor, but his real name was Messer Smith. Franklin Roosevelt won a landslide and went over there and put a stop to Hitler, who committed suicide in his bunk. World War II ended on VD Day.

Martin Luther had a dream. He went to Washington and recited his Sermon on the Monument. Later, he nailed 96 Protestants in the Watergate Scandal, which ushered in a new error in the annals of human history.