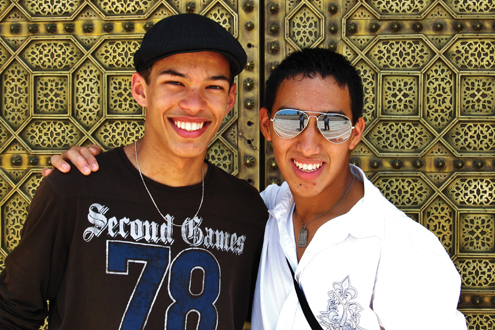 Arabic
When C.J. Aragon was a high school student in Albuquerque, New Mexico, he never would have guessed he would find himself on a balcony in the Middle East, talking about his love for tomatoes — in Arabic.

But in the summer of 2011, Aragon got on a plane to Morocco and joined the more than 3,000 students who have now participated in the National Security Language Initiative for Youth (NSLI-Y).

NSLI-Y is a U.S. Department of State-sponsored program launched in 2006 as part of an interagency initiative to support critical language learning. The program offers merit-based scholarships to American high school students to study one of seven critical languages (Arabic, Chinese, Hindi, Korean, Persian, Russian, and Turkish) in overseas summer or academic-year immersion programs. Since the program focuses on languages that are not commonly taught in U.S. high schools, there are no language prerequisites for this scholarship, and students are welcome to participate during a “gap year” between high school and college if they meet age and other eligibility requirements. The scholarship covers all travel, living, and program-related expenses.

Aragon decided to apply for NSLI-Y on a whim, having heard about the scholarship from a high school friend and program alumnus. Many colleges now offer financial assistance for study abroad, but there are fewer scholarships available to high school students, especially to study less-commonly taught languages.

“I had no idea that this would actually work out, but when it did, I was ecstatic,” he said. He arrived in Morocco having little background in Arabic or the Middle East, aside from a trip to Egypt with his family a few years before. That vacation sparked his interest in the language and culture.

“I fell in love with Arabic history and society,” Aragon said. “And that love only expanded during my time on NSLI-Y.”

The program is an intense language-learning program; participants spend four to five hours every day in class during summer programs and at least ten hours per week during academic year programs. Cultural activities, community service opportunities, and host-family stays reinforce language learning and provide students with a deeper understanding of the culture.

“Because NSLI-Y is an immersion program, it was almost like being in class 24/7,” Aragon said. “We basically lived in the language, because we had to speak Arabic on the streets, in taxis, at restaurants, etc.”

And in Aragon’s case, his host family spoke little or no English. In order to communicate with them, he had to use whatever Arabic he knew — and his skills improved daily.

“I really have no words to explain how amazing language acquisition is when you are living in the country, living and breathing it on a daily basis,” he said.

Studies have shown that immersion is a great way to learn any language. Georgetown University Medical Center researchers compared participants who studied a language in a traditional classroom setting with participants who learned through immersion. The found that in only five months the immersion group displayed the full brain patterns of a native speaker (see: http://gumc.georgetown.edu/news/stories/280856.html).

Aragon recollects a trip to the market near the end of his NSLI-Y experience in Morocco. He sat down with the merchant and talked to him for over an hour about his family and his study abroad experience, and then proceeded to haggle for a tea set.

Aragon has continued to take Arabic classes at his university, and last summer, he studied Arabic in Oman on the Critical Language Scholarship program (www.clscholarship.org), another State Department initiative aimed at college students. Next year, he will be studying Arabic in Oman on a Boren Scholarship (http://www.borenawards.org/), funded through the National Security Education Program (NSEP).

“NSLI-Y gave me a future and opened up a whole new world for me,” he said. “I had the opportunity to meet the most amazing people, see the most stunning places, live the life of a local, learn a new language, grow as an individual, and become part of the NSLI-Y family. I have to say it is pretty hard to beat the NSLI-Y experience!”

Russian
Even though Lily Herbert was almost 5,000 miles away in Russia during the summer of 2010, her NSLI-Y experience left her feeling the same way.

Herbert, who began learning Russian in high school, was encouraged by her teacher to apply for the NSLI-Y scholarship. Though she had never been to the country before, she jumped at the opportunity and was soon on her way to Kirov, Russia.

“Before I got to Russia, I could barely speak or understand Russian and knew very little about the culture,” Herbert said. “I wanted to learn to speak it conversationally and also blend in culturally in Russia.”

Though her high school classes had taught her basic grammar and vocabulary, NSLI-Y gave her the chance to understand how the language connected to the culture — and that was key.

Now, after her summer program and the academic-year NSLI-Y program she participated in during 2011-2012, Herbert is comfortable conducting everyday transactions and interacting with Russians in a variety of situations.

And for Herbert, this familiarity with people from a different country and background is what she cherishes most.

“The NSLI-Y experience taught me that people anywhere can have the same sense of humor, and the small, everyday aspects of life are basically the same for everyone — work, love, eating, etc.,” she said. “And also importantly, I learned a lot about myself and my own culture while in Russia.”

Herbert has gone on to take the most advanced levels of Russian offered at her university and recently spent the summer in Kazan, Russia, studying Tatar, a Turkic language spoken there. She claims that her experiences, beginning with NSLI-Y, have shaped her future.

“It completely changed my life and the way I look at the world, and gave me skills and opportunities from which I continue to benefit immensely. I was chosen for an academic research assistant position because of my Russian and Tatar language skills, and was able to go back to Russia to study Tatar because of my previous experience in Kazan. I am much more patient, flexible, and able to handle a vast array of situations in both a single and multicultural context thanks to the ability to negotiate between different cultures I gained from my experience on NSLI-Y.”

Hindi
In 2009, a year before Herbert’s first trip to Russia, Alycia Gideon was about to embark on her first trip to India as a NSLI-Y Hindi student.

Although there are no language prerequisites for NSLI-Y, Gideon already had some experience with Hindi — she was an alumna of STARTALK, another critical language program and sister program to NSLI-Y. STARTALK offers short-term, summer language programs in the U.S. for K-12+ students and teachers (https://startalk.umd.edu).

“My STARTALK teachers were so supportive and encouraging, and they were the ones who told me about NSLI-Y,” Gideon said. “I was excited because I never thought I would have an opportunity to go abroad at such a young age — no one in my family has ever been abroad before.”

STARTALK was where Gideon’s passion for Hindi and Indian culture took root, and she knew NSLI-Y would be the perfect next step to nurture her interest.

“I knew how to read and write Hindi a little bit because of STARTALK, but I knew NSLI-Y would challenge me and push me to grow,” she said.

And it did, but not only in the ways she expected.

Living with a host family was, hands down, the best part of Gideon’s NSLI-Y experience. She had an incredible relationship with her host family and even returned to stay with them a year later when she volunteered with a nonprofit organization, Teach for India.

“We spent hours in conversation every day as they explained things like Hinduism and Indian beliefs and practices,” Gideon said. “I learned as much at home as I did in the classroom.”

In the classroom, she mastered reading and writing the Devanagari script and greatly increased her vocabulary.
And like most NSLI-Y alumni, Gideon has continued studying the language post-program. After her return to India as a volunteer, she gained more conversational skills and went on to qualify for the Hindi for Heritage Speakers class at her university.

NSLI-Y participants come from all over the U.S., study in all corners of the globe, and pursue careers in a variety of fields. Though they may have different career goals, their interest in languages and cultures brings them together and shapes the way they view the world. They know that foreign-language skills are important not only for conducting international trade and politics but for developing empathy for people from completely different backgrounds.

Aragon, Herbert, and Gideon are staying connected in another way too. All three have been selected to represent their regions for the newly formed NSLI-Y alumni association. As regional representatives, they encourage other NSLI-Y alumni to stay engaged through language learning, community service, and other career and educational opportunities. They also spread the word about NSLI-Y through their schools and communities.

“I recommend NSLI-Y to almost everyone,” says Gideon, “as I have seen the way it has positively impacted both my life and the lives of my friends who have also gone abroad. You learn independence and resiliency, expand your understanding of the world, and meet family and friends who enrich your life and shape your path.”

“I would not be interested in learning languages if NSLI-Y had not given me the opportunity to do so,” Aragon said. “And I’m so, so glad they did.”

Gayatri Surendranathan is a senior at the University of North Carolina, Chapel Hill. She interned with the Youth Programs Division at the U.S. Department of State during the summer of 2013.