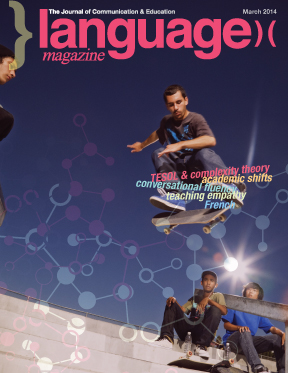 The Ukrainian conflict has highlighted the instability of nations in which languages and cultures compete for dominance. Despite fundamental differences, parallels have been drawn with the situation in the U.S., where Spanish is now being seen as a challenge to English in some areas. Although there is no danger of a Ukrainian-style conflict in the U.S., more must be done to encourage linguistic integration and equal access to economic opportunities, and thus minimize the potential for tension between communities.

In Ukraine, the division has been over-simplified by many commentators as an east (Russian-speaking) and west (Ukrainian-speaking) divide. Past polls indicate that a majority of Russian speakers living in the country have expressed loyalty to Ukraine and not Russia. Also, some people who identify themselves as Ukrainian-speaking may speak Russian in their day-to-day lives. However, the country’s politics have been dominated by the linguistic divide since the breakup of the Soviet Union. Back in 2004, governors in eastern Ukraine warned that Russian-speaking regions in the east would secede if Viktor Yushchenko became president. The disputed election of Viktor Yanukovych, a Russia-backed candidate, was overturned and Yushchenko won in a reelection. The country remained politically divided, but discussion of eastern secession quickly waned. Ten years later, Yanukovych, elected in 2010 after disappointment in the Orange Revolution, has been ousted, and the east-west divide has again come to the fore.

Making Ukrainian the sole national language back in 1991 was a divisive move on which politicians have played to gain advantage. Yanukovych is a Russian speaker from the east and, despite his efforts to please nationalists by promoting the language, he still makes mistakes in Ukrainian. Yulia Tymoshenko (just released from jail), who lost the 2010 election, has spent years mastering Ukrainian, yet she called the 2012 law making Russian an official language “a crime against the state.”

The lesson from Ukraine and other linguistically diverse nations is that the creation of an official language leads to division rather than unity. It is usually a ploy to cater to nationalistic minorities for political gain. Further­more, the groups that speak unofficial languages become constitutionally excluded, while their languages and cultures are delegitimized. In the U.S., where states and cities have enshrined English as the sole official language, we should learn from this experience and allow languages to develop organically without governmental intervention.

While Spanish is a very important language in the U.S. — almost 40 million Americans speak it at home — English is the de facto language of the nation and it does not need any official recognition as such. No matter how unjust it may be, the reality is that Americans who don’t speak and write relatively well in English have less chance of economic success than those who do. Nobody knows that better than non-English speakers themselves, who are clamoring for classes, books, apps, CDs — anything that will help them to learn the language.

Instead of wasting time, effort, and money on amplifying divisions by creating a sole official language, we should be providing more free or low-cost programs to adult English learners and increasing investment in research-proven methodologies to help younger English learners achieve language competency and content knowledge hand in hand. Of course, the more forward-thinking English learners — and native English speakers — will see it as an advantage rather than a threat to be competent in another language, too.

French Focus
Long before festivities kicked off for this month’s celebration of La Francophonie, French was hitting the headlines