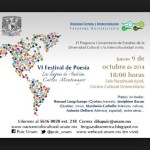 The Universidad Nacional Autónoma de México is preparing for the sixth Festival de Poesía Las Lenguas de América, Carlos Montemayor (The Languages of America Poetry Festival, Carlos Montemayor), which will take place on October 9 on the Mexico City campus. The biannual festival brings together the best poets to represent some of the over 800 languages spoken in the Americas, including languages that originated in Europe and arrived with the colonists (English, Spanish, French and Portuguese). The festival takes its name from Carlos Montemayor (1947-2010), who founded the event in 2004.

The festival seeks to increase interest and awareness of the languages indigenous to the Americas without distinguishing between languages and dialects, to promote the idea that no language is superior to another. UNAM will be livestreaming the event. For more information, visit www.nacionmulticultural.unam.mx.